The business of changing the world 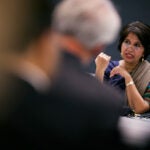 Jobs for homeless veterans in Boston, access to electricity in Pakistan, food storage for small farmers in Sri Lanka, water purification in Bolivian villages: They’re pressing issues that span the globe, with one thing in common. Harvard students are trying to solve them.

As seven groups of undergraduate and graduate students enrolled in Sociology 159 — commonly known as the SE Lab, for Social Entrepreneurship Collaboratory — gave one-minute pitches for their socially conscious startups, it was clear that Harvard houses the energy and creativity to tackle complex, public problems.

To succeed, however, would-be social entrepreneurs need practical skills to attract investors, carry out projects, and collaborate across the boundaries between public and private institutions. With that in mind, analysts and investors gathered at Harvard Kennedy School’s (HKS) John F. Kennedy Jr. Forum on Friday to sketch a roadmap to the future of socially responsible business.

“The Next Generation of Social Entrepreneurship” was an unofficial kickoff to the annual Social Enterprise Conference, a two-day affair sponsored by HKS and Harvard Business School (HBS) that drew 1,500 attendees for panels, workshops, and a career fair.

“I’ve found enormous resistance in universities to doing what we’re doing,” said Gordon Bloom, director of the SE Lab (which also operates out of Stanford and Princeton universities) and a lecturer on sociology in the Faculty of Arts and Sciences. But around Harvard, he said, he has noticed a recent shift in attitude.

“Different pockets of Harvard are struggling to understand how to create social entrepreneurship,” Bloom said, citing the new Harvard Innovation Lab and the recently announced President’s Challenge, a University initiative that will distribute a total of $150,000 to student teams pursuing solutions to global problems, from education to health to clean water and air.

Such entrepreneurs — and a culture that supports them — are increasingly critical, said Bill Drayton ’65, coiner of the term “social entrepreneurship” and CEO of Ashoka, a firm he founded in 1980 that provides financial and professional support to budding social entrepreneurs. As the world becomes accustomed to constant change, the old method of assigning problems to private business, government, or the nonprofit sector no longer makes sense.

“The faster things change, the less rules count,” Drayton said. “We need a different set of skills and institutions in this world.”

Still, most young people are taught to operate in the old world of rules rather than learning the collaboration, empathy, and problem-solving skills that foster an entrepreneurial and socially responsible mindset. Luckily, young people are best equipped to help tear down walls — between nonprofit and for-profit, public and private — that are often impediments to solving problems such as hunger or global warming, he said.

“Imagine how much more powerful it would be if the world’s entrepreneurs working on a common goal actually worked together,” Drayton said. “That is now happening.”

“No matter how good your idea is, no matter how excited and hardworking you are, you need the capital to be able to implement it and to grow,” said Velasquez, a senior fellow with the Initiative for Responsible Investment at the Hauser Center for Nonprofit Organizations.

Would-be social entrepreneurs should have a “deep knowledge” of their issue area, of the current actors in the region or issue they’re targeting, and of their potential sources of capital, Velasquez said.

“I also think it’s important to have respect for what has taken place to date,” Velasquez added. Anyone hoping to create social change in traditionally problematic or intractable circumstances should be willing to work with a wide variety of funders, from foundations to nonprofits to individual investors to large companies.

“Folks that you probably think you would never want to partner with might end up being the most important partner in one of your companies or projects,” she said.

Social entrepreneurship could be the rallying cause of the millennial generation, Drayton said. “We have a responsibility, just as we did during the civil rights movement … to remove the invisible footnote ‘I’m not those people,’ ” and invest capital and energy into solving the world’s problems.

“The spirit and commitment to change at this institution has not changed,” Drayton added, hearkening back to his days as a Harvard undergraduate. The question for today’s Harvard students, he said, is “Are they going to be part of the 1 percent or the 100 percent? We get to make that choice.”