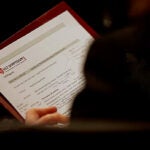 What can historians learn by being expert witnesses in court? They can learn to cooperate, to state the facts, and to leave their opinions and academic squabbles in the library.

“There’s no room for academic blather,” said Caroline Elkins, a Harvard history professor who studies colonial rule in East Africa. In court, she said in a recent lecture, the judge is the “teacher” and the academics — famous for squabbling — have to give up their “sandbox.”

In 2008, Elkins was named the first of three “expert witnesses,” historians who were called upon to provide evidence to the High Court of Justice in London. (She and the others are advisers to the British law firm Leigh Day.) At issue is a coming trial that gives aging Kenyan Mau Mau insurgents and sympathizers the opportunity to prove claims of rape, torture, murder, and other crimes that they allege happened in the waning days of British colonial rule in the East African country.

The Mau Mau led a 1952-1960 rebellion that British officials at the time called “the Emergency.” In that era, 32 white civilians were killed. At least 11,000 — and perhaps as many as 50,000 — black Kenyans died, half of them children. About 80,000 were imprisoned, and up to 1.5 million were displaced and shuttled into what Elkins called a “pipeline” of prisons and forced settlements.

Elkins is author of the Pulitzer Prize-winning book “Imperial Reckoning: The Untold Story of Britain’s Gulag in Kenya” (2005). This month, she will send the third installment of her testimony to the court, a 75-page document. The two British historians who recently joined her as expert witnesses, are David Anderson, whose book about Kenya, “Histories of the Hanged,” also appeared in 2005, and young defense studies scholar Huw C. Bennett.

Elkins studies the civil side of the conflict: the Mau Mau era’s camps and prisons. Anderson studies capital cases from a time when due process was suspended and 800 insurgents were sent to the gallows. Bennett studies the role of the British Army in putting down the rebellion, including controversial interrogation and intelligence-gathering methods.

“We each have our own specialties,” said Elkins during a Jan. 25 lecture, the first in a weekly spring colloquium series sponsored by the W.E.B. Du Bois Institute. But all of them are “revisionists” who challenge traditional interpretations of the war, including the usual assumption that British colonial abuses in Kenya were the exception and not the rule.

Collectively, said Elkins during her Thompson Room lecture, their scholarship provides what she called in a recent article an “alchemy of evidence,” a portrait of “systematic violence over time” by colonial authorities against the Mau Mau.

On a screen behind her, she showed a chart of how the punitive British pipeline worked, circa 1954. “I had to reconstruct the logic of the pipeline itself,” she said, a task that took her five years in British and Kenyan archives. “This case rests on historical evidence,” said Elkins. Without it, Mau Mau plaintiffs never would have won the right to trial.

Contact with the courtroom offers a cautionary tale, she said. The intellectual tumult of historical debate in journals and in the press reveals fault lines, and scholars consider a little battering the price of doing business. (Elkins called such paper battles “a nerd-off.”) But the particulars of such scholarly debates will be used in court. If a book review criticized one of the historians on methodology, for instance, that contention becomes grist for a defense lawyer and is open to legal scrutiny. That’s what makes this case novel, said Elkins. “History is on trial.”

Her own use of African oral histories in “Imperial Reckoning” led some reviewers to call the book speculative and lightweight, she said, as if it were “some kind of fictive account of Mau Mau memory.” But if you look at the book carefully, Elkins said, there are 600 footnotes and fewer than 300 citations from oral histories.

At the same time, having to send documents to court gave historians lessons in compression. For her first expert testimony, Elkins said, she boiled down her book into a 100-page document. It contained just the facts, without shading, asides, or opinions. After all, objective reasoning is at the core of the legal system, said Elkins. But there can be a culture clash between the law and humanistic scholarship. In the law, she said, “there is none of the kind of indeterminacy that we like.”

From 2006 to 2009, critics waged a war of opinion over revised histories of the Mau Mau era. But in the end, the collective evidence of the case “is overwhelming,” said Elkins, and points to systematized British abuse of Kenyan civilians. “Like most things in the British Empire, this was very well thought out.”

Last year, more evidence came to light, when 300 boxes of British documents from the Mau Mau era (1,500 files) turned up in a secret repository in a village in Southeast England. It was a rare find. (Elkins estimated that from 1958 to 1963, up to 3.5 tons of documents were destroyed by the British in Kenya.)

The new papers are being digitized and assessed by what Elkins called her “Team Mau Mau” at Harvard, as well as by a team at the University of Oxford. The files reveal fresh evidence of torture and cover-up, and detail more than 450 cases of abuse.

Her role in the civil court case has shown that history can be a “complementary knowledge set” useful in litigation. At the same time, her involvement with the law provided a rare sort of satisfaction. “There’s nothing more satisfying,” said Elkins, “than doing this kind of work and having it matter.”