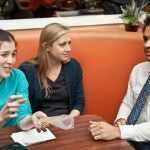 Student’s aim: A harvest of good

Institute of Politics panel focuses on Israel, Iran, and the bomb

Will Israel do it?

Anyone reading the news lately understands what that question means. Will Israel execute a pre-emptive military strike on Iran’s growing nuclear capabilities? If so, another question follows: What will the consequences be?

Experts from the Harvard Kennedy School (HKS) took up the issue on Wednesday in “Countdown: Iran, Israel and the Threat of a Military Strike,” a 90-minute panel hosted by the Institute of Politics at the John F. Kennedy Jr. Forum. In the end, they all answered both questions the same way: No one really knows.

“We all have to be careful here,” said panelist Charles Freilich, a senior fellow in the International Security Program at the Belfer Center for Science and International Affairs. “These are things most of us in the room don’t know.”

Meanwhile, in the United States at least, there is hope that the military strike will be averted by other means: negotiations (sporadic), sanctions (tightening), and even covert action (mysterious). There is even the hope that the world could one day reconcile itself to Iran as a nuclear state: one capable of building a bomb but — like Japan — one that declines to do so.

And even if Iran obtains the bomb, there is hope that — at best — it would mean another sort of Cold War, in which nuclear powers posture but do not act directly against each other. The Cold War is an analogy that seems to work, said panel moderator Stephen Walt, the Robert and Renee Belfer Professor of International Affairs at HKS.

He also added the night’s truest statement: This will not be the last panel on a potential Israel-Iran conflict.

Hope is where you find it. Freilich noted that just last week some Israeli citizens pleaded with their government to hold off on striking Iran until after May 29. That’s when Madonna’s 2012 World Tour makes a stop in Tel Aviv. “True story,” he said. It got the only laugh of the night.

After all, what’s so funny? To most Israelis the idea of Iran with a nuclear weapon means one of only two things, said Freilich, a onetime senior analyst at the Israel Ministry of Defense. It is either a dire threat, or an existential threat. It is either a very serious problem, or an invitation for an entire nation to contemplate its own extinction. “Just a few decades ago we looked into the abyss,” said Freilich of the Holocaust, “and no one was there. And Iran speaks today, openly, about Israel’s extermination.”

But consider also the threats that Iran sees. “Ever since its formation, the Islamic Republic has been faced with the threat of being overthrown” — starting in 1980 with its war with Iraq, said Iranian journalist Nazila Fathi. (She reported from her native country until the post-election violence of 2009, and is now a spring 2012 fellow at the Joan Shorenstein Center on the Press, Politics and Public Policy.) Today, having nuclear capabilities is a matter of national pride, said Fathi, who compared it to a defiant Iran nationalizing its oil industry in 1963.

At the same time, she said, being a nuclear power would make Iran an undisputed regional power, capable of negotiating with the United States on equal footing — as a nuclear Pakistan does today.

Consider also Iran’s fear and distrust of the United States, said panelist Steven E. Miller, director of the International Security Program at the Belfer Center and a veteran nuclear nonproliferation expert. In refusing to stop their nuclear program, Iran is “going up against the planet’s 800-pound gorilla,” he said — a nation that has made regime change in Iran a staple of its foreign policy.

Iran’s fear, said Miller, “is not an idle fear” — especially after the Obama administration took up Bush-era rhetoric against Iran, and turned the screws even tighter on sanctions. Today as well, Iran remains nearly surrounded by American military might, including a naval fleet that has transformed the Persian Gulf into “an American lake.”

But getting Iran to the negotiating table is at the heart of American strategy, said David Sanger ’82, chief Washington correspondent for The New York Times and an HKS adjunct lecturer in public policy. That strategy has three prongs: diplomacy, sanctions, and a “very active covert program,” he said. “All this is designed … to convince Iranians that only negotiations will work.”

The prospect of an Israeli military strike might help get Iran to the negotiating table, said Sanger, who is in constant touch with White House officials. “They’re happy to have Israeli pressure — in theory,” he said — but they believe an attack itself would be a mistake.

A strike might set Iran’s nuclear program back a few years, but would drive it underground too. To Israel, that would mean Iran will have “all the time in the world” to work on a bomb, said Sanger. But to the more optimistic United States, an underground nuclear program in Iran would still be vulnerable to diplomacy, sanctions, and covert action.

To Miller, this critical moment requires the United States to offer Iran a deal, concessions, and peace. But, he added, “I’m not sure we’re prepared to do any of those things.”

Freilich, a five-year veteran of the Israel Defense Forces, also favors diplomacy over action — especially because the problem of a nuclear Iran extends to the whole Middle East and to wide concerns about international security. “This is an issue on which it behooves everyone to show a degree of humility,” he said. “The stakes here are potentially devastating.”

At the same time, the world needs to understand the existential moment Israel is facing, said Freilich — and that means Israel’s bottom line will be: Iran must never acquire a nuclear weapon.

If Israel strikes, Iran will “retaliate significantly” with at least some of the few hundred Shahab rockets it has, said Freilich. Hezbollah will do the same, unleashing fire from its “unprecedented arsenal” of 50,000 rockets, he said. Beyond that, an Israeli strike could even trigger a war with Syria and Egypt, both of them shaken by the Arab Spring. Add to this “a highly difficult and problematic international response,” said Freilich. In the end, he said of a military strike, “this is one of the heaviest, most critical decisions that any Israeli premier has ever had to make. … There is no correct decision here.”

Within Iran, the consequences of a military strike would also be dire, said Fathi, who feared that “the rhetoric in both Israel and Iran is moving more and more towards war.” At stake, she said, are Israel and Iranian lives; world oil supplies; Middle East regional stability; and — most importantly for her as an Iranian citizen — “the future of Iranian civil society. It “showed signs of maturity in 2009,” but is being steadily frayed by economic sanctions. “If there is a war,” added Fathi, “the Iranian regime will be able easily to galvanize the whole country against an external enemy.”

The answer to the dilemma of a military strike actually lies with the United States, and not Israel alone. “The most important thing is to bring the Iranians to the negotiating table,” said Fathi, worried that war would wipe out Iran’s own proponents of a simmering Arab Spring. “If you have one ally,” she said, “do you make them weaker?”