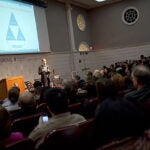 Harvard Kennedy School panel explores: ‘Is War on the Way Out?’

A bloody uprising in Syria. A seemingly endless insurgency in Afghanistan. A savage civil war in Libya. A terrorist attack in Iraq. It is not difficult, University Distinguished Service Professor Joseph Nye said in introducing the John F. Kennedy Jr. Forum on Monday, to compile from the headlines a list of current wars and conflagrations.

But the panel, assembled under the title “Is War on the Way Out?,” was there to discuss the oddly counterintuitive notion that violence, among both individuals and states, is on the wane, or at least on a downward trajectory.

“It’s a property of the human mind that we estimate risk by memorable examples,” said Steven Pinker, Johnstone Family Professor of Psychology at Harvard, panelist, and author of “The Better Angels of Our Nature.” Bloody bulletins from the front lines of various conflicts are easily recalled by most of us.

But the data seem to show that humans are instead behaving better.

Both Pinker’s book and “Winning the War on War,” by fellow panelist Joshua Goldstein, professor emeritus at American University, point to startling statistical evidence. The annual number of battle deaths worldwide has fallen from about 300 per 100,000 of population during World War II to the single digits during the 1970s and 1980s, to less than 1 per 100,000 in the first decade of this century. Other indicators of violence illustrate a similar trend.

While scholars now paint a picture of primitive man as warlike and aggressive, and much of human history is written around conflict, something seems to have happened to the way humans approach violence. The United Nations and its peacekeeping operations have helped, Goldstein argued. So have changing norms about the acceptability of institutionalized violence. And so has the fact that trade has replaced conquest as the basis of prosperity.

Toft, author of “God’s Century: Resurgent Religion and Global Politics,” said Pinker and Goldstein provide important arguments on the “continuum of violence” from the personal to the state level. But she criticized a reliance on Eurocentric data as well as the presentation of the data.

For example, Walt argued, the use of nuclear deterrence by the United States and the Soviet Union could be used as an explanation for the absence of major conflicts during the Cold War.

The panelists seemed to agree, however, that while encouraging data exists, it is no ground for complacency.

“We have it in us to be violent, to make war,” Goldstein said. “The idea that this is a recipe for complacency is exactly the opposite of the message I would ever want to give. The fact that we’re making progress means that we need to keep working.”