Not your average road trip 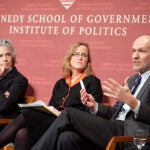 Unlike her predecessors, however, Woltz found herself making those introductions not in New York or Boston, but in a conference room in Ho Chi Minh City.

Early last month, Woltz and five classmates found themselves lined up for a formal exchange of cards with their new Vietnamese associates. The students had read up on local customs: Start with the highest-ranking person in the room. Line up the cards you receive in front of you on the table. And, whatever you do, don’t pass out your card without using two hands. That’s rude.

“It took forever,” Woltz said. “It felt very ritualistic. But by the end of the week, they were taking us out for lunches.”

If the process was initially nerve-wracking, Woltz and her classmates could take heart in knowing that they were hardly alone. Their weeklong visit, during which they feverishly tackled a marketing project for a telecommunications company, was part of an ambitious new field-learning course now required of all first-year M.B.A. students.

The 900 students all took whirlwind trips to emerging market economies. In teams of six, the students fanned out across a dozen locations — from Cape Town and Mumbai, to Shanghai and Warsaw, to Istanbul and Buenos Aires  — to tackle business challenges with real companies. Each team received a proposal from its global partner for a new product or service and was asked to present a helpful plan by the end of the week.

The trips were the focal point of an experimental new supplement to HBS’s long-standing curriculum, called Field Immersion Experiences for Leadership Development, or FIELD. The three-part project — carried out on campus and abroad over the academic year — has educational leaders and observers looking to HBS, standard-bearer of the celebrated case-study method, to create a strong business education model for the 21st century.

“FIELD reflects our understanding of what it means to be a leader in a global century,” said Nitin Nohria, dean of HBS. “We see FIELD as a powerful way of complementing the case method by putting students in real-world business scenarios, both here on campus and in emerging economies around the world.”

The project was announced a year ago to a flurry of media coverage and speculation. FIELD would be a test of how innovative an elite business school — known for pioneering the use of a rigorous, classroom-based teaching method, no less — could be while remaining true to its core principles. In the weeks leading up to the student trips, “Poets & Quants,” the business-school rankings website, called FIELD “arguably the boldest experiment ever carried out in graduate business education.”

FIELD was the result of several years of discussion at HBS, spurred by preparations for the School’s centennial celebration in 2008.

“It was a point at which we as an institution engaged in some deep reflection,” said Youngme Moon, Donald K. David Professor of Business Administration and senior associate dean. “HBS pioneered so much of the methodology of how business education is done around the world today. The question we asked ourselves was: 100 years from now, what will be our legacy, and how can we begin building it today?”

Jay Light, then dean of HBS, commissioned a faculty panel to assess the state of the M.B.A. program and the readiness of its graduates to lead in a new century.

“This started in 2006-07, when everyone thought the [business] world couldn’t be going better than it was going,” said Srikant Datar, Arthur Lowes Dickinson Professor of Accounting. But as Datar and his colleagues started interviewing other school’s deans, business leaders, students, and recruiters, they heard serious concerns about the state of business education that prefigured the coming global economic crisis. It was clear that the need to reconfigure the M.B.A. extended well beyond HBS, and beyond the timeline of the 2008 anniversary.

In 2010, Datar and colleagues David Garvin, C. Roland Christensen Professor of Business Administration, and Patrick Cullen, then a research associate at HBS, published “Rethinking the MBA: Business Education at a Crossroads.” The book was more than a philosophical treatise. Containing reams of data and several case studies of top B-schools, it identified skills that were in desperately short supply, even in elite M.B.A. programs.

The book’s central theme urged business schools to teach ways of doing and being, rather than simply knowing. That idea became the basis for FIELD’s areas of focus: leadership (the being of business), global immersion (the doing of business), and the integration of that learning across the academic year.

For Moon, who became chair of the M.B.A. Program after Nohria’s appointment as dean, the answer was to develop FIELD, with input from faculty across the School. In the fall, all 900 new students met for the first component of the course, which incorporated small group activities and projects meant to develop leadership. In October, students received their assignments for FIELD 2, the global immersion trips. This month, when students return for the spring semester, they’ll be assigned to new groups of six. Each team will be given $3,000 and charged with conceiving and developing a scalable business of its own.

“When you undergo a change this dramatic, it can only come from the bottom up,” Moon said. FIELD, she added, “is really just the tangible manifestation of a more conceptual commitment that the faculty has made to field-based learning, small-group learning, and experiential learning opportunities.”

Students, too, have shown an increasing interest in getting out into the field while in business school. The old M.B.A. stereotype — a young twenty-something sent to business school by a company hoping to put him on the management track — rarely applies today. Incoming M.B.A. students are now slightly older, more experienced, and less likely to have their way paid by an organization. Some students are hoping for a change of field after they graduate; many say they’d like to learn the tools to start and run their own businesses.

“The students we accept today are more business savvy than ever,” Moon said. “The standard for what we teach in our classrooms has gone up over time.”

Popular student clubs, such as the long-standing Entrepreneurship Club or the newer, consumer Internet-focused Startup Tribe, coupled with University-driven initiatives such as HBS’s Arthur Rock Center for Entrepreneurship and the Harvard Innovation Lab, have catalyzed that interest, giving M.B.A. students the space, funding, and social supports to tackle real-world challenges while juggling case readings and internship interviews.

“On one hand, you could say, ‘Why change?’ On the other, it’s our responsibility to have our antenna up on the extent to which the demands of the business environment are changing,” Moon said. “We’re operating in a context now in which the world of business and the world at large have become increasingly complex. It affects not just traditional business, but domains like education, government, health care, and social enterprise.”

The trips were also an experiment in HBS’s logistical capabilities. Sending 1,000 students, faculty, and support staff around the globe took the coordinated efforts of HBS Executive Education, external relations, legal and other administrators, and the School’s global research centers. While HBS prides itself on a robust alumni network, the task of finding enough global partners to help create 150 team trips required HBS to reach out and work with alumni on an unprecedented scale, Moon said.

“We’ve had to use muscles we’ve never really had to use before,” she said. “In the process, we’re developing some different kinds of flexibility we’re just beginning to tap into. We’re inspired.”

The realities of global markets

The FIELD trips represented a creative opportunity to train students in many of the critical skills identified in “Rethinking the M.B.A.” Those include developing a global perspective, implementing effectively in the face of organizational realities, responding creatively to problems, and — perhaps most important in the wake of the financial crisis — understanding the limits of the financial models and markets that students learn about in the classroom.

Nowhere are the models less certain than in rapidly developing markets like the ones just visited. Although HBS already boasts a student body that’s one-third international, and many more students who have worked abroad, Datar stressed the need to give students a leg up in tackling the unique challenges that American companies face overseas.

“A large number of companies are going to have to get connected with emerging markets in the coming years,” Datar said. “They’re very different [from the American market], and if you think about and approach them as if they’re the same, you won’t succeed.”

Melody Koh, a first-year student whose FIELD experience was in Chennai, India, found that despite her own global background — she grew up in Taiwan, before moving to the United States for college — tackling a new international market was still a challenge.

She was struck by the daily contrasts they saw between the upper classes and people with limited incomes. Their global partner’s product might sell to a prosperous middle-income market in America, but in India the middle class meant something else entirely.

That was an important realization for the team members, one they could only have learned on the ground. But it also spoke to a larger theme that emerged during the trip.
“The income disparity is huge,” she said. “The living situation between a middle-class and an upper-middle-class family is very different. You think, ‘Oh, India is an emerging economy with 8 or 9 percent GDP growth,’ ” but that growth isn’t always visible in the field.

The experience broadened her understanding of what a rapidly developing market looks like, and how growth affects the people in those economies, sometimes unevenly.

“It’s easy to bucket these emerging countries in the same group, but they’re not the same,” she said.

As the FIELD course heads into the final phase of its trial year, one thing is certain. The case method isn’t going anywhere, HBS leaders say. It remains the core of the required curriculum — 80 percent of the courses at the School employ it — as well as HBS’s international calling card among aspiring M.B.A.s and business leaders.

Barrie Altshuler, a first-year M.B.A. student, chose to attend HBS “mainly because of the case study method,” which she’d used in her undergraduate business education at the University of California, Berkeley. “It keeps you on your toes,” she said. “You just don’t have the chance to zone out.”

While Altshuler hadn’t heard the news about FIELD before deciding to attend HBS, the new course surpassed her expectations.

“I think it was really valuable just being on the ground, face-to-face with your client,” she said. “You’re diving deeper into the business, bouncing ideas off them, coming up with an actual solution, and getting live feedback. When you do a case, you discuss it, and that’s it.”

She and her teammates are now back in Boston. But officials from their partner company in Ho Chi Minh City, Vietnam, have promised to weigh the team’s suggestions and follow up with the steps they’ve chosen to take. Unlike a case, in which a business’s course of action can be rigorously argued but not truly affected, the results from the FIELD experience are still very much in play.

“It was cool to establish that, to have a relationship that’s going to continue in the future,” Altshuler said.