A call to reverse security measures 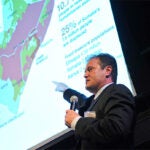 In the end, Somali famine preventable

Nader, Fein decry policies of both Bush and Obama administrations

Ralph Nader, LL.B. ’58, and Bruce Fein, J.D. ’72, visited Harvard Law School (HLS) for a talk sponsored by the HLS Forum and the Harvard Law Record. At the event, both men discussed what they called lawless and violent practices by the White House and its agencies that have become institutionalized by both political parties.

Fein has held positions in the Department of Justice and has served as research director for Republicans on the Joint Congressional Committee on Covert Arms Sales to Iran and on the American Bar Association’s Committee on Presidential Signing Statements.

During the talk, which was called “America’s Lawless Empire: The Constitutional Crimes of Bush and Obama,” Fein gave examples of what he called constitutional crimes perpetrated under the Barack Obama and George W. Bush administrations, such as detaining enemy combatants indefinitely, diverting funds authorized for fighting terrorism to the wars in Afghanistan and Iraq, and using predator drones against persons never formally charged with crimes.

Nader, a consumer advocate, author, attorney, and five-time candidate for president, said the government and the American people have rationalized illegality because the country has gotten used to the military-industrial complex and the corporate state under which it has been operating for more than half a century.

He also argued that there are many national security threats on American soil that, because they don’t stem from foreign terrorists, are ignored by the government. Thousands of Americans die each year because of workplace accidents, preventable pollution, and lack of access to health insurance, he said, all under the apparent protection of government agencies. He said that the money spent on the war on terror should be diverted to child health care, advancement of education opportunities, public works, and environmental protection.

“The 300,000 Americans who die from preventable causes should reside under the definition of national security, but they aren’t the priority of any major party. Obama is more concerned with terrorists overseas than with the preventable deaths of these people directly under his authority and responsibility,” Nader said.

Both men took issue with the National Defense Authorization Act, which sets the budget and policies of the Department of Defense and has expanded the power of the government to fight the war on terror. The act permits, among other practices, the indefinite detention of terrorism suspects without trial. Fein encouraged those in attendance to contact their members of Congress about repealing it.

“I want to underscore that it is not an option in a democracy to be a spectator to politics, because it’s a collective endeavor,” Fein said. “We have a moral obligation to use our eyes and ears to check government abuses because, even if they don’t affect you, they could affect your neighbor.

Lawyers in particular have a duty to be more than spectators, Nader concluded. Rather than profiting from conflict, he said they should work to prevent conflict and act with moral urgency to demand answers and transparency from the government, particularly when it is involved in acts of war.

HLS Forum is a nonpartisan student organization dedicated to bringing open discussion of a range of legal, political, and social issues to the Law School. It was founded after World War II by 30 returning soldiers as a memorial to their fellow students who died in the conflict. The Harvard Law Record, published since 1946, is the oldest law school-affiliated newspaper in the nation.