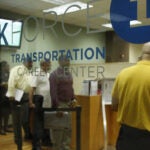 U.S. Ambassador to Pakistan Cameron Munter doesn’t beat around the bush: America’s relationship with Pakistan — a vital ally in securing Afghanistan’s fragile stability — has deteriorated. And when it comes to mending those frayed ties, Munter is even less sentimental.

“If we’re going to get out of what has been a very tough period, it is going to be because both countries decide they’re going to look at something bigger than themselves,” Munter said at Harvard Kennedy School (HKS) on Monday. Both sides need to ratchet down their emotions, he said.

“We call this the Turner doctrine,” Munter added, invoking “the American philosopher” Tina Turner. “What’s love got to do with it?”

Munter’s assessment, which he shared with a packed hall of HKS students and Mideast observers, came at the close of what he called “a very tough year” for the United States in Pakistan. In the beginning of 2011, the arrest and negotiated release of Raymond Davis, an American CIA contractor, caused bad blood on both sides. Two months later, an American drone strike killed nearly 50 people in North Waziristan. And not least of all, the killing of Osama bin Laden by American troops in Islamabad last May was taken as an insult to the Pakistani military, Munter said.

Munter’s job is “arguably the most challenging diplomatic position in the world,” said R. Nicholas Burns, Sultan of Oman Professor of the Practice of International Relations at HKS, who moderated the discussion. “It is a vital relationship for both countries, and from an American perspective, there isn’t a more important country for our vital relationship with Afghanistan.”

In part, America’s recent failures in Pakistan stem from overpromising, Munter said. Americans, sensitive to Pakistanis’ lingering feelings of betrayal, developed a set of goals for development in Pakistan in 2008 that encompassed everything from women’s rights to water resources to telecommunications. Those lofty plans too often fell by the wayside as America pursued its military goals in the region.

“American policy began to struggle with the distinctions, or even the contradictions, of its long-term goals and its short-term goals,” he said. “We were trying so hard to reach our counterterrorism goals that we in part did damage to our own long-term goals.”

The relationship between the two countries’ militaries has suffered, and “our military presence in the country has shrunk dramatically,” Munter said. American diplomats must also account for the rising generation of Pakistani generals, part of the “lost generation” who were cut off from American training, who are “less familiar with American traditions” and perhaps less likely to see eye to eye with their Western counterparts.

Still, Pakistan has shown its commitment to fighting terrorism. The country has experienced huge losses fighting insurgents at its own borders — nearly 4,000 troops and between 30,000 and 40,000 civilians, according to Munter.

“In any other country this would be called a civil war,” he said. “It causes a fair amount of resentment in Pakistan, and we would be wise to remember what it is that they’ve lost.”

Despite the setbacks of the past year, America can save its relationship if it recommits to development efforts in Pakistan, by working not just with the state and the military but with business, universities, and the media.

“The only way to get past a relationship that’s fraught with anger and misunderstanding is to create a partnership,” he said. “You have to get as far away as you can from an assistance relationship.”

The bad news, Munter said, is that America is unpopular in Pakistan, with a public favorability rating of roughly 6 to 10 percent. The good news, however, is that “Pakistanis care desperately what America thinks. They want desperately for Americans to do good things in Pakistan, [and they] want to see us live up to their image of what they think Americans can do.”

“In this relationship, neither side is blameless,” Munter said. But when it comes to economic growth and stability in the Middle East, “there is a fundamental affinity between what Americans want and what Pakistanis want.”