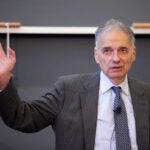 A call to reverse security measures

New York City’s Center for Economic Opportunity (CEO) was named the winner of the Innovations in American Government Award today by the Ash Center for Democratic Governance and Innovation at the Kennedy School of Government.

CEO was established by Mayor Michael R. Bloomberg to design, implement, and evaluate unique initiatives that combat urban poverty among New York City’s low-income workers, at-risk youth, and families with children. Over the past five years, CEO has collaborated with 28 city agencies to launch and scale up more than 50 programs and policy initiatives in the areas of asset development, employment and training, and education.

“Not only is the Center for Economic Opportunity innovative, it demonstrates a sea change in how a city can unite the disparate interests of previously siloed agencies, funders, providers, and businesses to tackle poverty, one of our nation’s major growing challenges,” said Anthony Saich, director of the Ash Center. “In honoring CEO’s efforts as an Innovations in American Government Award winner, it is our hope that jurisdictions across the country can benefit from best practices in financial literacy, education, and employment training to move the working poor up the economic ladder.”

CEO’s commitment to reducing poverty expands to key policy efforts: as a result of CEO’s work, New York City was the first jurisdiction in the country to introduce an alternative to the much-criticized federal poverty measure. The new measure of poverty for New York City is based on recommendations from the National Academy of Sciences. Informed by CEO’s work, the U.S. Census Bureau released its first report on a new Supplemental Poverty Measure for the nation in 2011.

“Time and again New York City eagerly tries bold ideas even at the risk of failure — and that is precisely why our programs are so successful,” said Bloomberg. “Not only are our results improving the lives of New Yorkers, but as the award from Harvard shows, we are a leading model for the nation in the charge to find solutions to deeply entrenched challenges.”

Poverty in the Big Apple
The Center for Economic Opportunity was established by Bloomberg in 2006, allowing the city to design and test effective programs before and during the economic downturn. According to CEO’s most recent metrics, 19.9 percent, or 1.6 million, of the city’s 8.2 million residents are classified as poor. Employers are increasingly making a high school diploma a prerequisite for employment, yet 18 percent of New Yorkers have earned less than a high school diploma and 23 percent have only attained a high school diploma. The center’s evidence-based literacy, GED, and other employment and training programs offer important opportunities to the city’s low-income workers and job-seekers.

“Poverty is one of the great challenges of our time, and as someone who has spent a great deal of time working on the issues of poverty and social policy, I’m particularly pleased that the Center for Economic Opportunity was selected as our Innovations in American Government Award winner,” said David Ellwood, dean of Harvard Kennedy School. “The award honors the center’s efforts to support the working poor at key transition points — starting school, entering the workforce, and having a family.”

The Innovations in American Government Awards program was created by the Ford Foundation in 1985 in response to widespread pessimism and distrust in government’s effectiveness. Since its inception, nearly 500 government innovations across all jurisdiction levels have been recognized and have collectively received more than $20 million in grants to support dissemination efforts. Applications are now being accepted for the 2012 Innovations in American Government Award. Government applicants are encouraged to apply here by March 1.

To read the full release.