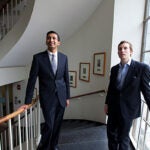 India’s ambassador to the United States discussed developments in the Middle East last Thursday, saying that the region’s peoples should determine how they’re governed, that Israel should have secure borders, and that Iranian oil will continue to flow into India despite international sanctions over Iran’s nuclear program.

The ambassador, Nirupama Rao, said India supports Iran’s right to develop peaceful nuclear power but opposes any clandestine move to develop nuclear weapons. Though India shares international concern about a possible weapons program, she suggested that India cannot simply disengage economically from Iran. That’s because India gets about 10 percent of its oil from that country. Though the percentage has been falling in recent years, it would be impossible to halt imports immediately.

“Continued oil imports from Iran, albeit at reduced levels, are … tied to sustenance and survival of millions of our people,” Rao said.

Rao spoke amid rising international tensions concerning Iran’s nuclear program. Earlier this month, the United States tightened its existing sanctions, freezing U.S. assets of the Iranian government, the Central Bank of Iran, and other Iranian financial institutions. Even as the United States and other nations have imposed sanctions, Iranian President Mahmoud Ahmadinejad this week showed off new nuclear technology and announced that his nation would begin producing yellowcake uranium, from which enriched uranium is made.

Rao’s comments came during a session of the Middle East Seminar, sponsored by the Center for Middle Eastern Studies and the Weatherhead Center for International Affairs. Lenore Martin, a research associate at both centers, introduced the ambassador during the event in Harvard’s Knafel Building.

Ties between Iran and India date far into the past, long before the discovery of oil and development of the modern energy economy, Rao said. She labeled as false reports that India is paying Iran in gold for its oil and that India is amidst a major re-engagement with Iran.

Beyond India’s own oil needs, Rao said, there are practical reasons for India to remain engaged with Iran. With Pakistan barring Indian transit to Afghanistan, Iran is the only land route through which Indian aid — which totals $2 billion — can reach war-torn country.

Rao said any military conflict involving Iran would be disastrous for the region. She also addressed the ongoing turmoil from the Arab Spring popular democratic uprisings. She said India believes that the region’s peoples have the right to determine how they’re governed and that change should not be imposed militarily from outside.

She said it is unclear how recent developments will change the region, and the path toward a new normal may be a long one. It is critical, she said, that extremists not hijack popular movements and step into the vacuum left by fallen regimes.

India also has strong ties to Israel, she said, with the two nations recently marking 20 years of diplomatic relations. A comprehensive settlement of the Israeli-Palestinian question is essential to the region’s future, she said.

Rao said that India has significant interests in the Middle East that are likely to grow. India’s bilateral trade with nations in the region totals $130 billion. India gets 70 percent of its energy from Middle Eastern nations. India’s response to developments there are influenced by the well-being of its own people, including some six million Indians who work in the region and send $20 billion home to their families each year.

“India has a deep and abiding interest in this region,” Rao said.