In a land of equality, racism 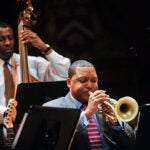 The melding of American music

In 1959, the Cuban Revolution banished dictator Fulgencio Batista. It also banished racism. Or so the story goes.

A new art exhibit at Harvard tells a different tale. “Queloides,” a show whose name is the Spanish word for scar, is a counterpoint by Cuban visual artists, many of them persons of color. Its collective intent shows how race and racism — a sort of social scarring — continued in post-revolution Cuba, simmering beneath a cultural facade of social equality and justice.

“Queloides” was shown twice in Havana, first 15 years ago. Its creators grew up in a communist Cuba that was economically diminished by the end of the Cold War and the withdrawal of Soviet support. “They began to talk about subjects that were unspeakable in Cuban official culture,” said University of Pittsburgh historian Alejandro de la Fuente, a scholar of race and slavery. “In art, you can talk about unspeakable topics.”

More recently, an expanded version of the show, organized and curated by de la Fuente, made the rounds in New York and Pittsburgh. In Cambridge, a stunning (though abbreviated) version is on display through May 30 at the Neil L. and Angelica Zander Rudenstine Gallery, sponsored by the W.E.B. Du Bois Institute for African and African American Research.

For the opening in late January, de la Fuente joined in a panel discussion on art, race, and Cuba. With him in the institute’s cozy Hiphop Archive were Cuba-born artist Elio Rodriguez and moderator Henry Louis Gates Jr., the institute’s director and Harvard’s Alphonse Fletcher University Professor.

A few years ago, de la Fuente was researching the show. He was stung that “Queloides” (pronounced “Keyloids”) got so little attention in the official Cuban press in 1997 and 1999. Even on the Internet, he said, mentions were few and slight. But he thought this was a corrective story that needed to be told, and he called the show’s revival “a history project.”

It is possible to criticize racial disparities in Cuba and still hew to your national identity. “I’m a Cuban and a black artist,” said Rodriguez. “You can’t separate it. … You can’t pull against the way you are.” Yet racism remains a reality in Cuba for the dark-skinned, he said. He described routine police stops that ignored his white-skinned friends, and later a lexicon of jokes and insults that apply to black Cubans.

Then there is sex, a factor in racial fears in Cuba as elsewhere. Rodriguez, whose website is called Macho Enterprise, chooses to be playful about the matter. One series of posterlike paintings portray a black man (looking much like himself) as a sort of superhero. “Macho Forever” (1997) is one; another is “Gone with the Macho” (2007), in which a Rhett Butler figure (again, looking like Rodriguez) is suddenly very black. Other paintings in the series depict black figures as leering cherubs or as a pouncing bull.

At the same time, Rodriguez, who now lives in Spain, does not regard himself or his friends of that era as political artists. “We just wanted to make some art,” he said, and dreaded getting boxed into categories. But the political label was unavoidable in Cuba, said de la Fuente. “‘Queloides’ was a transgression.”

Still, even in repressive Cuba, art has made its place, he added. “Cuban authorities have come to realize a Cuban painting, however good, doesn’t topple the government.”

Censorship is a fact of life for artists in Cuba, said Rodriguez. “You have to know your limits, [but] it’s a game,” he said. Artists would devise one explanation of their work for timid bureaucrats and another for buyers and friends. “It’s not a lie,” said Rodriguez of the practicality of deception. “It’s a different truth.”

The panelists agreed that racial stereotypes and divisions endure worldwide, whether in Spain, said Rodriguez, or in the United States, said de la Fuentes, a professor here for two decades. In Cuba, there is racism, but there is integration in housing, street life, and the workplace.

Years ago, when he moved to the United States from his native Cuba, de la Fuente was struck by “the degree of separation, physical separation” of the races here. “For somebody who came from the Caribbean,” he said, “that looked terribly foreign.”