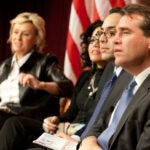 Harvard’s ambitious new initiative to spark innovative teaching and learning kicked off with a daylong conference on Friday that drew together authorities and scholars from the University and beyond to debate, discuss, and share ideas in the field.

The inaugural conference was part of the Harvard Initiative for Learning & Teaching (HILT), a University-wide presidential initiative launched through a $40 million gift from Rita E. and Gustave M. Hauser, aimed at catalyzing innovation in higher learning.

“What we hope to ask and answer with HILT is how can we fully embrace all the possibilities before us as teachers and learners, how can we make constant discovery and renewal a part of every teacher’s life, and, as we experiment, how can we best evaluate what is successful and then sustain and scale it?” said Harvard President Drew Faust during opening remarks for the conference at the Northwest Science Building.

Other early initiative-supported projects include developing a consortium of staff from across Harvard that will provide instructional and technological support, as well as an infrastructure for capturing and archiving video for teaching and other purposes, in collaboration with Harvard’s Academic Technology Group.

The initiative also has established the 2012-13 Hauser Fund Grants program that issues awards between $5,000 and $50,000 for innovative proposals in teaching and learning. Currently, 255 letters of intent, submitted from faculty, staff, and students at every Harvard School, are being considered for final proposals.

A professor of psychology from Washington University in St. Louis surprised some attendees of a morning session. Less studying and more testing enhances learning, suggested memory expert Roddy Roediger during a discussion on the science of learning. Roediger showed the audience how students who were frequently tested on a subject on the first day of an experiment in his lab performed better on the same tests two days later, compared with those who studied more but had fewer tests on the first day.

“What you really need to practice to be able to retrieve something two days later … [is] retrieving it.”

For Steven Pinker, Harvard’s Johnstone Family Professor of Psychology, teaching students to write well is a fundamental charge of a good university. But, he lamented, “we are not succeeding.” To write effectively, an author must remember that he or she likely knows much more about a particular subject than readers do, said Pinker. Placing yourself in the shoes of your audience, he argued, “might be the most important cognitive process in the crafting of clear prose.”

A series of interactive afternoon sessions gave a group of Harvard professors the chance to show their colleagues and contemporaries what goes on in their own classrooms.

Proving that the lecture format remains an effective teaching tool, Tom Kelly delivered a lively talk based on his popular General Education course, “First Nights,” in which he explores the performance premieres of five seminal works through a cultural, musical, and historical lens.

Waving his hands emphatically to the beat of accompanying audio and video clips, Kelly, Harvard’s Morton B. Knafel Professor of Music, carefully deconstructed Igor Stravinsky’s “The Rite of Spring.” Kelly’s presentation style, which during class often involves running to a piano to play an important chord or passage, offers students a new way of listening, and hopefully fosters in them a love for the subject matter.

I want them to know “how lucky they are to be alive on a planet like this that has music on it,” he said.

Eric Mazur was in his seventh year of teaching when he realized “my students were not learning; they were simple regurgitating back to me what I delivered to them, and then promptly forgetting it a few months later.” Effective teaching requires the assimilation or “sense-making” of that information, he said. And for that, the students themselves hold the key. In his classes, Mazur, the Balkanski Professor of Physics and Applied Physics, uses his popular and effective peer-instruction method, in which he asks questions of students and then has them try to convince each other of their own reasoning during class.

“It is absolutely essential,” Mazur said, “that we engage them.”

But developing sustainable methods of teaching and learning also requires an infrastructure and a culture of innovation, said Youngme Moon, Donald K. David Professor of Business Administration and senior associate dean at Harvard Business School (HBS), during an afternoon panel that included Harvard Provost Alan Garber. She pointed to the School’s new experiential learning program as an example of innovative pedagogy. In January, 900 HBS students took field trips to a dozen locations around the world as part of the School’s Field Immersion Experiences for Leadership Development, a new supplement to its traditional curriculum.

“You should never underestimate the power of trying to do big, collective things as an organization,” said Moon, adding, “the transformative nature of the [new HBS program] is palpable.”

The symposium’s attendees ranged from the deans of Harvard Schools and distinguished professors to staff, students, and participants from beyond the Harvard community who were eager to develop and share their thoughts on innovative teaching and learning.

“Getting all these great minds together from all across the University is a great thing,” said Harvard senior Senan Ebrahim, a neurobiology concentrator and former Undergraduate Council president, who helped to create a video for the conference that captured student perspectives on teaching and learning. “The opportunity for these experts to share what they do and explore how it can be applied to different disciplines is amazing.”

Michael D. Smith, dean of the Faculty of Arts and Sciences and a longtime proponent of innovative pedagogy and excellence in undergraduate teaching, was impressed by the symposium. “This has been tremendous. … I think the culture is already changing on campus, and this is an example of it,” Smith said.

The conference showed that the University is “on the cutting edge of great change in learning and teaching,” said Rita E. Hauser, who attended the symposium with her husband, Gustave M. Hauser. “Harvard 50 years from now will be very different from Harvard today; it’s inevitable.”