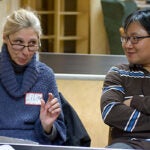 Neighbors for the 21st century

Six finalists for the Goldsmith Prize for Investigative Reporting have been announced by the Joan Shorenstein Center on the Press, Politics and Public Policy at Harvard Kennedy School(HKS). The winner of the prize, which carries a cash award of $25,000, will be announced at an awards ceremony on March 6 at HKS.

The Goldsmith Prizes are underwritten by an annual gift from the Goldsmith Fund of the Greenfield Foundation. The prizes recognize and encourage journalism that promotes more effective and ethical conduct of government, the making of public policy, or the practice of politics by disclosing excessive secrecy, impropriety and mismanagement, or instances of particularly commendable government performance.

The six finalists for the 2012 Goldsmith Prize:

Read more about the journalists and their stories.