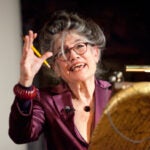 Shining a spotlight into darkness

Nancy Gertner is a former federal judge, the author of a recent memoir (“In Defense of Women”), a professor of practice at Harvard Law School, and an authority on sentencing, jury system discrimination, forensic evidence, and other legal areas.

But go back to June 1971, the month she had a loud argument with her mother in their kitchen in Flushing, Queens, N.Y. Gertner was about to graduate from Yale Law School and assume a prestigious clerkship in Chicago. But her mother wanted her to take the test to be a Triborough Bridge toll taker — just in case.

For a young woman lawyer at the time, “just in case” wasn’t a bad idea. The law was a man’s world. But just a decade later, the culture seemed to swing toward what feminists worked for: parity. By the late 1980s, first-rate law firms were hiring men and women in equal numbers. “We thought the numbers would do everything,” Gertner said during a lunchtime talk on Feb. 23 that was sponsored by the Women and Public Policy Program at the Harvard Kennedy School. (Weekly talks there are part of the program’s mission to create gender equality.)

But faith in the raw numbers turned out to be “dramatically wrong,” said Gertner. “Advancement has stalled.” Half of all new lawyers are women, she said, but only 16 percent of equity partners in law firms are female. And of lawyers who leave the profession, most are women — and most do it because of family and social concerns.

Gertner used the lens of the legal profession to speculate why, after earlier rapid advances, feminism’s cultural agenda seems to have stalled. (Universities, she said, are in an analogous position, with plenty of women graduating as Ph.D.s, but few getting to the top of the academic game.)

During her years on the bench from 1994 to 2011, Gertner got used to being trotted out at events as an example of progress. “You’re supposed to say: ‘Things are fabulous,’ ” she told her audience at the Taubman Building’s Cason Seminar Room. But they are not. The women’s movement was not just about having more choices, she said, but about “revolutionary” changes in the workplace and at home that have not happened yet.

In today’s “imperfectly transformed world,” said Gertner, it is social expectations and an “unfriendly workforce” that mean a woman — if anyone — usually will stay home with the children. (She called this reality “the maternal wall.”)

Gertner cited one study that showed 30 percent of women leaving the law, including 15 percent of equity partners, those with a financial stake in a firm. Another study, she said, showed that 34 percent of female law graduates have worked part time, compared with only 9 percent of their male counterparts.

So without a corresponding transformation of family responsibilities, feminism is likely to stay stalled, she said. “We’ve hit a wall.”

It’s not a situation that discrimination lawsuits can correct, said Gertner, because so many women are “leaning out” of their professions — that is, anticipating future pressures and so choosing career paths that enable them to leave the workplace more readily. (She gave as an example the woman who chooses a small family-practice firm over a larger one that presents more challenges and opportunities.) “If women are leaning out” of their own volition, said Gertner, “then their failure to advance can’t be the subject of a lawsuit.”

Besides, she added, overt gender discrimination in the workplace has gone the way of discos and bell-bottoms, “a world that no longer exists.” What is left, said Gertner, is “implicit bias,” which has the same stalling effect on feminism as the maternal wall.

There is also an issue with executing the law itself — a denial of the power of context. The gender discrimination lawsuits that do make it to court are weakened by a tendency to “slice and dice” the circumstances of alleged discrimination, said Gertner. “You don’t look at them as a course of conduct,” but as separate events. “Discrimination in the real world does not fit into the legal models we have.”

One way to counteract this tendency in the law is to have judges on the bench who are aware of the way the world works. “I had an appreciation of context,” said Gertner of her time as a judge. “I never saw the law as legal rules on the page.” (That appreciation, in part, was biographical. Her judicial tenure was influenced by her early childhood in a tenement on Manhattan’s lower East Side, by championing unpopular clients as a young lawyer, and by becoming a mother at age 39.)

In the absence of overt gender discrimination, it is hard to get legal redress, said Gertner. For young women in the workplace today, “it’s the opacity of discrimination” that makes advancement difficult, she said, instead of the stark realities of discrimination in the 1970s. Gertner said, “It was easier for me.”

With feminism stalled by social pressures at home and the workplace, she offered a radical idea. “The government needs to step up to the plate,” Gertner said, beginning by providing incentives for day care that would make it easier for women to combine career and work.

After all, there is a “business case” to be made for gender equality in law firms and workplaces, “beyond the obvious need to tap a rich vein of talent,” said Gertner. In a diverse world, workplace diversity adds to “the texture and the richness of the dialogue,” she said.

In the end, feminism’s mission of workplace parity has been stalled by the three factors of the maternal wall, implicit bias, and the opacity of discrimination, Gertner said.

She said advocates have a list of things to do: parse workplace discrimination by collecting the right data; engage in collective action; and challenge the government to underwrite day care and other engines of cultural change.

But all this is not enough. “The most important thing is: We have to be unsatisfied,” Gertner told her largely female, professional audience. “We have to not believe that this was the accomplishment of the women’s movement — that I’m here and that you’re here is somehow all we can achieve.”