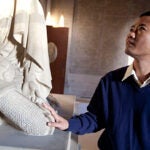 Up by his bootstraps

Few recent Supreme Court cases have received as much attention — and drawn as much ire — as Citizens United v. Federal Election Commission. In a 5-4 decision, the court ruled that the First Amendment prohibits government from placing limits on independent spending for political purposes by corporations and unions. To proponents of campaign finance reform, Citizens United had the detrimental effect of inundating an already-broken campaign finance system with corporate influence. At an event sponsored by the Harvard Law School (HLS) American Constitution Society on Tuesday, HLS Professor Lawrence Lessig, author of “Republic Lost,” and Jeff Clements, author of “Corporations Are Not People,” reviewed the impact that Citizens United has had on the political process.

Clements said that the court’s decision exacerbates two problems that the American political and electoral system had already been facing — the large amount of campaign spending and the growing influence of corporate power on the political process. Clements said that both problems need to be fixed in order to restore democracy but that, rather than addressing these problems, the Citizens United decision instead requires that the American people fundamentally reframe their notion of corporations.

Although some legal observers regard the decision as simply a bad day on the court, Clements said that Citizens United actually represents the culmination of a steady creation of a corporate rights doctrine that is radical in terms of American jurisprudence. He provided a history of the idea of corporate personhood and corporate speech, which began only in the 1970s under Chief Justice William Rehnquist. Lessig added that the system that has resulted is one in which elected officials must spend 30 to 50 percent of their time fundraising, and thus make decisions based not on what is best for their constituents, but on what their super PACS and other major donors want to see.

“We have a corrupt government, yet one that is perfectly legal,” said Lessig. “We’ve allowed a government to evolve in which Congress isn’t dependent on people alone, but is instead increasingly dependent on its funders. As you bend to the green, that corrupts the government.”

As a result, he said, members of Congress develop a sixth sense as to what will raise money, which has led them to bend government away from what the people want government to do and toward what their funders what government to do. To fix the problem, we need to produce a system where the funders and the people are one and the same. The solution, Lessig said, is a multipronged approach that includes a constitutional amendment explicitly stating that corporations are not people, as well as a movement to publicly fund elections and provide Congress with the power to limit independent expenditures.

Lessig is the Roy L. Furman Professor of Law at Harvard Law School, and director of the Edmond J. Safra Center for Ethics at Harvard University. Clements is the co-founder and general counsel of Free Speech For People, which is a national nonpartisan campaign working to restore democracy to the people and to return corporations to their place as economic rather than political entities.