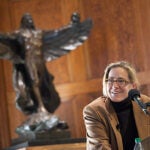 U.S. Secretary of Education Arne Duncan would like to see reform of the nation’s public educational system, and he urged administrators, educators, politicians, and parents to work together to overcome the nation’s tough educational challenges.

“It’s a stain on our nation that today one in four American students fails to finish high school on time or drops out … that is absolutely morally unacceptable and economically unsustainable,” Duncan told a crowd Monday at the Harvard Graduate School of Education’s Longfellow Hall.

In an Askwith Forum talk titled “Fighting the Wrong Education Battles,” he said that too often “well-intentioned advocacy goes awry.” Frequently, decision-makers search for an ideal solution to educational reform instead of collaborating and compromising on “imperfect” but important initiatives that could bring lasting change.

Stakeholders must consider in- and out-of-school influences as part of that overall solution, said Duncan. While poverty greatly affects a child’s performance, great schools and teachers are the “most effective anti-poverty tool of all.” He suggested creating full-service community schools that can offer educational as well as health and social services to disadvantaged children, and pointed to the Obama administration’s Promise Neighborhoods, an initiative that funds organizations that develop similar, inclusive school models.

Reform also involves developing rigorous assessments and college and career-ready academic standards like those created by the Massachusetts educational system, said Duncan. Boosting student achievement is not an “either/or solution,” he said. “Educators and the broader community should be attacking both in-school and out-of-school causes of low academic achievement.”

For Duncan, the argument over whether teacher evaluations should include measures of student achievement is another “false choice.”

Critics of standardized tests are right to complain that such tests are flawed can’t accurately gauge factors like “classroom management, teamwork, collaboration, and individualized instruction,” said Duncan. He acknowledged that teacher evaluations must never be based solely on test scores and should include principal observations, peer reviews, student work, and surveys.

“Still, the shortcomings of today’s tests,” he said, “doesn’t mean we should simply abandon the use of standardized testing.”

Another important part of education reform involves getting managers and labor leaders to work together to engage in “tough-minded collaboration and step outside of their comfort zones,” Duncan said.

He suggested that No Child Left Behind, the 2001 act that includes educational reforms that critics say place too much emphasis on testing and standardized measures, is “fundamentally broken.” Duncan said that states, districts, neighborhoods, and schools need to be held to rigorous standards, but simultaneously be given room to find their own means of meeting high benchmarks.

“In my mind, it’s tight on goals, being absolutely clear about goals, but give folks a lot more room to hit them.”