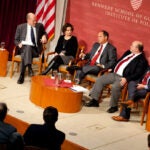 Scholars ponder how to improve relations between Mideast and West

Following months of upheaval marked by revolutions, the Middle East and the West find themselves at a rare crossroads. The opportunity now exists for the two regions to build bridges that can foster new levels of cultural, religious, and political understanding and mutual respect through education.

Moderated by R. Nicholas Burns, professor of the practice of diplomacy and international politics at the John F. Kennedy School of Government, the discussion drew a standing-room-only audience of more than 100 to Loeb House, and focused on three central issues: How will the revolutions of the so-called Arab Spring affect the rest of the Middle East? How can the West combat the rising tide of Islamophobia? And, finally, what can be done to ease anti-American sentiments in the Mideast?

“It is very clear that what took place in some countries in the Arab world is an earthquake to the region,” Prince Alwaleed, whose 2005 gift created the Harvard program, said in describing the Arab Spring. “Those nations that did not receive the earthquake — I hope they have received message. No matter how much social change you create in your country, no matter how many financial or economic benefits you give your people, you need to have some political change whereby the people feel they are involved and can participate in the political system.”

In examining the fallout from the Arab Spring revolutions, John L. Esposito, founding director of the Prince Alwaleed Bin Talal Center for Muslim-Christian Understanding at Georgetown University, emphasized that new leaders in countries like Libya and Egypt must respect democratic institutions as a first step toward nurturing their fledgling democracies.

“The Islamists who have won, they have to demonstrate that they will walk the way they talk on issues like political pluralism, human rights, and inclusiveness,” he said. “The challenge for the EU and the U.S. is to realize that the old narrative –— that somehow support for authoritarian regimes ensures security and stability — is a failed narrative. The challenge on the other side is that those who come into power have to recognize what the democratic process is like, and to come to appreciate the notion of a loyal opposition.”

For Professor Yasir Suleiman, director of the Prince Alwaleed Bin Talal Centre of Islamic Studies at Cambridge University, the revolutions of the Arab Spring were about more than emerging democracies, but represented the beginning of the transformation for millions from subject to citizen.

“There is now a debunking of the idea of Arab exceptionalism, or that Arabs don’t want democracy,” he said. “They have demonstrated in a very serious way, paying for it with their blood, that they do want a change. When you think about it, it’s not just a question of freedom and dignity, it’s about something far more important: it’s about emancipation.”

While the Arab Spring offers hope for the future for millions living in the Middle East, many Arabs and Muslims living in the U.S. and Europe continue to face discrimination simply because of their background or religion. The answer, said Professor Ali Asani, director of Harvard’s the Prince Alwaleed Bin Talal Islamic Studies Program, is better education, on both sides.

“I think what we are witnessing today is an inability to accept difference,” said Asani. “People talk about a clash of civilizations, but I like to talk about a clash of ignorances. I think at the heart of these phobias, whether it’s anti-Americanism or Islamophobia, is a profound cultural and religious illiteracy.

Referring to current political discourses in America that cast doubt on the loyalty and patriotism of American Muslims, he remarked, “We have entered into a culture of fear … and democracy cannot function if we are afraid of our neighbors, and our neighbors are Muslim. Yes, we should be concerned about democracy in other parts of the world, but what about democracy here?”

Islamophobia, however, is not a problem that is limited to the U.S., as Professor Hugh Goddard, director of the Alwaleed Bin Talal Centre for the Study of Islam in the Contemporary World at the University of Edinburgh, explained, citing the case of Anders Breivik, whose attack in Norway was sparked by what he believed was political support for Muslims.

“One feature I think we should mention is the insidious influence of the Internet,” Goddard said. “In his manifesto, Breivik cited a number of American figures as a way of legitimizing his views, so it is clear that this is an international problem.

“With respect to what to do about it, education does seem to be the key, and this is very much the business of our four centers in the U.S. and Europe. We are working to address this question, of the severe ignorance that exists of Islam as a religion, and Islam as a culture.”

Concerns over Islamophobia are only one-half of the problem, the center directors said. Arab nations must also address the continuing anti-American sentiment held by many of their citizens.

In part, however, the issue is one of marketing, said Magda Shahin, director of the Prince Alwaleed Bin Talal Bin Abdulaziz Alsaud Center for American Studies at the American University in Cairo.

“I think the problem of anti-Americanism is a problem of marketing,” Shahin said. “The U.S. either does not know, or does not care, as a superpower, to market itself. The United States Agency for International Development (USAID) has spent millions to repair sewage systems, telephones ,and electricity in Egypt, but today the Cairo Opera House, which was rebuilt with the support of the Japan International Cooperation Agency, is more visible.”

“Many average citizens in the Middle East only encounter the U.S. through fast-food chains or other corporate ventures or through military force,” said Alexander Lubin, director of the Prince Alwaleed Bin Talal Bin Abdulaziz Alsaud Center for American Studies and Research at American University of Beirut. “These encounters are often overbearing, often violent, and sometimes condescending.”

Just as with Islamophobia, Lubin said, the solution lies in education, and with centers like the six established by Prince Alwaleed bin Talal.

“I think we combat anti-Americanism by educating people in the U.S. and the Arab world about their interdependence,” he said, “and by showing the rich history of Islam in the United States as well as the role America can play in the Arab world. I think the kind of dialogue that takes place at each of our centers is one way we can combat this.”