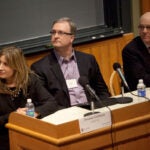 Putting yourself out there

“The Rant” took place on Feb. 19, 2009, less than a month after President Barack Obama’s inauguration. CNBC host Rick Santelli denounced the federal mortgage assistance program on the floor of the Chicago Mercantile Exchange as an effort to “subsidize the losers,” and thus was an affront to the nation’s founding principles.

Santelli called for “another tea party” like the one that helped to spur the American Revolution, and within days protesters took to the streets. By the fall, hundreds of Tea Party groups had sprung up across the country. A year later, the movement fostered a conservative surge in the 2010 congressional elections.

To conservatives, the Tea Partiers are patriots; to liberals, they’re a scourge on progress and civil society. Theda Skocpol, Victor S. Thomas Professor of Government and Sociology, used different words to describe the activists to undergraduates gathered at Sever Hall Wednesday: grandma and grandpa.

“These are older men and women, almost all white, a little better educated than typical Americans,” she said. “Their homes are modest size, with pictures of the grandkids. They’re regular white, middle-class people.”

Skocpol’s remarks came during a lecture on her most recent book, “The Tea Party and the Remaking of Republican Conservatism,” written with Harvard Ph.D. candidate and co-presenter Vanessa Williamson. The discussion was one in a series of twice-daily book talks by Harvard faculty and alumni during Wintersession programming. Although targeted primarily to undergraduates, the talks were open to the University community.

The Tea Party’s origins are legitimately grassroots, Skocpol said. Its members are passionate and well-informed. Many members have been involved in politics since the 1960s.

“These are ordinary men and women who teach themselves about issues and come up with ways to pressure lawmakers in districts and states,” she said. “They have been conservative-minded for their whole lives. Many first got involved in politics during the Goldwater era. Others have been active in the Republican Party on the conservative side, or Christian conservative groups.”

Tea Partiers hate “big government” and want to reduce government, she said. At the same time, most of the people Skocpol and Williamson interviewed received Social Security checks, were enrolled in Medicare, and/or collected veterans’ benefits. Skocpol said Tea Partiers knew that their benefits were expensive and, contrary to popular perception, thought that these federal programs were legitimate.

“They think that government spending is OK as long as it’s for people who’ve worked all their lives and earned the benefits,” she said. “They speak of themselves as hard-working Americans who deserve all they’re getting from society.”

Skocpol said that the activists saw “moochers” and the government programs that supported them as the source of the country’s problems. They often identified these “freeloaders” as lower-income people of color or young people. They saw food stamps, Medicaid, and even Pell Grants as unearned benefits sought by people who were unwilling to work. More than either of these groups, however, Tea Partiers directed their ire at immigrants.

“Illegal immigration looms very large in the minds of the grassroots Tea Party movement as a threat to America,” Skocpol said. “That’s true here in Massachusetts as well as in Arizona. It doesn’t seem to matter how many immigrants are actually there in the local area. Illegal immigrants are not resented because they take work from Americans; they’re resented because they use services like education and health care, and ‘real’ Americans like the Tea Partiers will have to pay taxes to cover those benefits.”

While the grassroots origins of the movement may be authentic, its expansion and success, Skocpol and Williamson said, are largely the product of funding from professionally run conservative advocacy groups and publicity from right-leaning media outlets. Americans for Prosperity, funded by the wealthy Koch brothers, leveraged the Tea Party to promote an ultra-free market agenda and to assail Obama. Fox News got the word out about the location of rallies and provided information on how to contact organizers. Above all, conservative media gave a sense of solidarity and effectiveness to Tea Party groups dispersed across the country.

“Conservative political action committees saw a good thing erupt in 2009, and joined with right-wing media leaders in cheerleading, pushing, leveraging the grassroots protesters to effect change within the Republican Party,” Skocpol said. “Their goal was to move the GOP further to the right in policy terms, and to prevent moderates from getting elected, and from compromising with Democrats if they got there. The right-wing media helped to give scattered protesters and groups the sense that they were in something big together and could affect national politics.”

Although Republicans rode the Tea Party wave to electoral success in 2010 and may again in 2012, Skocpol and Williamson say that the movement creates major problems for the GOP long term. In the decades ahead, the American electorate is likely to include more of the people whose perceived interests the Tea Party appears to oppose most vehemently: the young, people of color, and immigrants. For now, though, conservative activists are well-organized, well-funded, and have the time and means to put enormous pressure on elected officials. Moreover, Skocpol said Tea Partiers could be a force in American politics for years.

“Many of these people are in their late 50s or early 60s,” she said. “They’re on Medicare. They’re going to be around for a while.”

After the talk, John Pulice ’15 said that he appreciated the chance to hear a member of the faculty talk about her work in a way somewhat different from a classroom, and added that the discussion taught him a lot about the Tea Party in his home state of Virginia.

“It was interesting to hear what the activists were saying in order to understand my own state better,” he said, “and to learn what the Tea Party is outside of our stereotypes of it.”

Freshman Sarah Coughlon agreed, saying, “The image of the TP is the guy in the Paul Revere outfit, and it’s not. It’s your grandma.”