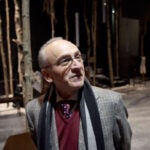 Jamie Rees ’12 turned in the first pages of his senior thesis and heard the two words every writer dreads: Start over.

“I had to write a draft during first semester,” said Rees, an economics concentrator who is writing about the debt crisis in the Euro zone. “I was still doing a lot of data stuff, and I didn’t want to write anything yet. I ended up spitting out pages of writing that was terrible.”

The good news is that the feedback came from bestselling author Walter Isaacson ’74, the former chairman of CNN and managing editor of Time, and was part of the Harvard College Winter Writing Program, a two-week Winter Break seminar for undergraduate nonfiction writers. Rees was one of 50 students admitted to the program, which is co-taught by Isaacson and Evan Thomas ’73, the Ferris Professor of Journalism at Princeton University and former editor at large at Newsweek.

“It’s been great,” said Rees. “The course is moving me in the direction of writing a story and explaining my topic in the form of a narrative, which helps because the Euro crisis is kind of a saga. Professor Isaacson also suggested I cut down some of my sentences and make things clearer.”

Clarity and simplicity are frequent themes in the program. Thomas said many Harvard students write well but run into the trap of making the simple complicated, rather than the other way around.

“Simple does not mean ‘simpleton,’ ” he said. “Simple often means quite the opposite, that you’ve really thought through the problem and found a clear way to express a complex thought. But students see a lot of different models of writing and think that they have to sound sophisticated by writing convoluted sentences. Really, they should take complicated thoughts and figure out how to render them in a clear way.”

Like Rees, each program participant submitted a writing sample, which was reviewed in meetings with Thomas and in small groups with Isaacson. Thomas also asked students to edit their own pieces with direction from a short guide that he authored for the class. Then he had undergraduates trade writing samples with classmates, edit and return the pieces, and compare the results. “The idea is for students to see how they edit their own piece, how their classmates edit the students’ piece, and then look at the difference,” Thomas said.

Students convened as a class for 90 minutes every afternoon to hear some of the country’s most distinguished nonfiction writers talk about their craft. During the two-week session, the program welcomed Pulitzer Prize finalist Megan Marshall, National Book Critics Circle Award winner Anne Fadiman, Washington Post columnist Alexandra Petri, and Peabody Award-winning radio host and author Kurt Andersen. The program’s first guest speaker, however, was none other than Harvard University President and Lincoln Professor of History Drew Faust.

Faust discussed her most recent book, “This Republic of Suffering,” which looks at the way the Civil War redefined death and identity in American culture. She used the example of a letter she discovered during her research to illustrate the challenges of balancing objectivity and sentimentality in writing about history. The note, written by a dying Mississippi soldier to his father, begins, “You will be delighted to hear from your son.” Faust explained that the “delight” stemmed from the fact that the father would know his son’s fate. The soldier would not be among the many war dead who went missing.

“For me, there is a kind of charge from looking at that letter and thinking, ‘Someone touched this,’ ” she said. “The connection to the soldier’s sacrifice, his suffering, is beyond words for me. A professional historian isn’t supposed to care about that. It’s supposed to be what the words are, what the impact of it was, what you interpret from it. But the magic of the embodiment of the letter is sentimental on the one hand, and emotional on the other.”

Faust’s candor and passion for her work made an impression on Lena Bae ’12, a government concentrator and program participant.

“It might be sentimental,” Bae said, “but as a student debating various potential careers, that’s the kind of bar I’d like to set on whatever it is that I choose — a career where I feel that extent of emotion, not necessarily of the heartbreaking kind, but the kind that reminds me why it is that I have made this choice.”

Isaacson, whose most recent work is a best-selling biography of the late Apple Computer co-founder Steve Jobs, said that he and Thomas were getting as much from the students as they were giving. It’s fascinating to talk to students who grew up in the digital age, he said, and to get their thoughts on what shapes nonfiction storytelling will take in the future. A Harvard overseer, Isaacson is even more excited about what the success of a course like this could mean for future Winter Break programming.

“It’s interesting to figure out what January can be,” he said. “Harvard teaches academic subjects well, but it would be fun to see if Winter Break could be a time during which more practical subjects could be done on a noncredit basis, whether it’s accounting, emergency medical training, or writing narrative nonfiction. There are all sorts of practitioners who would come to Harvard, even in January, and say, ‘I can teach you something useful.’ ”

Bae says the program has taught her to be more conscious of her audience. It’s also taught her that good writing takes time, and many revisions.

“I’ve learned to think much more about the reader, especially in terms of making things simple,” she said. “I’ve also learned that writing is a circular and extensive process. Your brain works on your piece during sleep, and gnaws on your ideas throughout the day. This means start early, no matter how badly your first draft comes out, and allow yourself to work on various pieces at the same time. I think simply recognizing that this is the kind of thing that your mind works on slowly will change how I play around with my writing process.”