Putting yourself out there 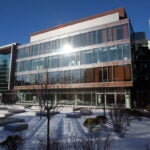 A symposium on teaching, learning

At first glance, the art of successful networking might seem embedded in the DNA of Harvard graduates. After all, the degree confers status, and Harvard alumni work among the top ranks in business, arts, politics, and other fields.

But the organizers of “Networking NOW: The Learn-How-to-Network Event,” held on Thursday, take a slightly different approach. This initial, multifaceted event, sponsored by the Harvard Club of Boston and the Harvard Alumni Association, underscored how networking is a skill that can be learned, practiced, honed, and perfected.

Harvard students may be brilliant, but too often at networking events, “You just stand in the corner with your drink and small desserts and talk to two people the whole night. And it’s a complete disaster, and that prevents you from wanting to go back to other events,” said Justin Lanning ’12, who moderated the panel discussion that kicked off the event.

Moreover, while the world is abuzz with the tools of social media, that new technology only goes so far, said Ken Ledeen ’67, chairman and chief executive officer of Nevo Technologies, during the panel discussion. Face-to-face encounters remain as important today as they were when Dale Carnegie published his influential book “How to Win Friends and Influence People” in 1936.

The chief component of a successful networking conversation is still listening, Ledeen said.

“Listening is such an unbelievable skill,” Ledeen said. “People love to talk about themselves. Just shut up and listen and let them talk. The fact you said nothing is probably to your advantage. You don’t need to impress them.”

But make no mistake, networking takes “being gutsy,” said panelist Susanne Goldstein, M.P.A. ’04, a businesswoman and author of “Carry a Paintbrush: How to Be the Artistic Director of Your Own Career.” Goldstein regaled the audience with stories of how her persistence and personality opened doors. She spoke of her “five from five” tactic of contacting five people and asking for five minutes of their time, during which she asked questions about them. “It was never about me,” she said.

Directly engaging the audience, she declared that those in the “sky seats” in the back got an “automatic F” because the point of networking is to get close and personal. With good humor, she gently chastised students who “came to a network event and did not bring a resume.” She practiced what she preached by handing out her business card at every opportunity.

Panelist Trey Grayson ’94, director of the Institute of Politics and a former secretary of state in Kentucky, discussed networking in politics, recounting how his connections helped him make the decision to plunge into a political race ahead of the pack and thus ensure he would have no primary opponents.

The key phrase to remember is “who do I know who knows somebody,” he said. Seek out key people for lunch or coffee, not with any specific goal in mind, but to establish long-term connections and relationships, he said. Cautiously, drop the “H-bomb,” i.e. mentioning Harvard; when he ran for senate, Grayson said, his commercials never mentioned that he went to Harvard.

Take advantage of new ways of staying in touch, Grayson said. “It is so much easier to get people’s contact information. Now it’s on your phone in your pocket.”

Ledeen, however, cautioned against the hype about social media. Rather, effective networking has two important ingredients, affiliation and reciprocity, he said.

Affiliation is not something achieved through Facebook, he said. He minimized the advantage of “six degrees of separation” services like LinkedIn “because the people who really do anything real for you are only one level away.”

For example, he has a friend who knows Bill Gates. If he wanted to contact Gates, that connection would help. Bill Gates knows Warren Buffett. But Gates is not going to help introduce him to Buffett. “The connections have to be personal … and you have to renew these relationships constantly,” Ledeen said.

Reciprocity is not just saying, “I’ll do something for you if you do something for me,” Ledeen said. Rather, “You have to make it clear that you are the kind of person who does do things for other people.”

After the panel discussion and skill workshops, the participants were able to put their skills to work during a student and alumni dinner and a “speed networking” exercise in which participants had but a few minutes to make a connection.

Freshman Jared Rosen came to the event to “test the waters” and was both excited and reassured by what he found. “The alumni came from a variety of fields and shared interesting/informative stories about how they got to where they are,” he said. “It was reassuring to hear that it took them a while to figure out what they wanted to do professionally, and that the college years are for exploration.”

The event emphasized that networking can happen anywhere — a party, a meeting, an elevator ride. Harvard graduates should reach out to alumni; people like helping other people, Ledeen said.

The difficulty, Goldstein noted, was that Harvard students are driven by goals but networking seems “goalless.” So, she said, approach networking in a Buddhist way: “Being open to everything, and being attached to nothing.”

But always carry a business card.