North Korea: Country behind a curtain 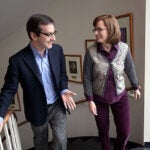 As the world watches the succession process unfold in North Korea, countries such as China, Japan, and Russia, whose interests diverge on many important global fronts, are unified in hoping the process goes smoothly for the perennially troubled, nuclear-armed nation.

Harvard authorities on China and Russia said during a panel discussion Monday that although those nations’ relations with North Korea are better than the West’s are, even Beijing and Moscow are left confused when trying to figure out North Korea.

And when Russians — who know something about running a country that keeps outsiders guessing — describe a country as opaque, you know that clues are hard to come by, said Mark Kramer, program director of the Project on Cold War Studies at the Davis Center for Russian and Eurasian Studies.

The situation isn’t much better in China, which is North Korea’s major — and perhaps only — ally, according to Anthony Saich, the Daewoo Professor of International Affairs at Harvard Kennedy School and director of the Ash Center for Democratic Governance and Innovation.

“Most Chinese officials are just as baffled as we are by North Korea,” Saich said.

Saich, Kramer, and Gordon, together with Carter Eckert, the Yoon Se Young Professor of Korean History, aired their views on events in North Korea since the death of leader Kim Jong-il in December and the succession of his youngest son, Kim Jong-un, as “supreme leader.”

The program, “Succession in North Korea: Perspectives from Harvard,” filled the Center for Government and International Studies’ Tsai Auditorium. It featured Eckert, Kramer, and Saich, and was moderated by Gordon. Korea Institute Director Sun Joo Kim introduced the event, which was sponsored by seven Harvard organizations, including the Ash Center, the Asia Center, the Davis Center, the Fairbank Center for Chinese Studies, the Kim Koo Forum on U.S.-Korea Relations at the Korea Institute, the Reischauer Institute, and the Program on U.S.-Japan Relations at the Weatherhead Center for International Affairs.

China wants a stable North Korea because it may have more at stake than other nations with respect to that nation’s future. Bound to North Korea by treaties and trade, China could face major problems if destabilization leads to war, Saich said. Japan, meanwhile, sees itself as a likely target if destabilization occurred and led to a desperate search for a common enemy to unify the people behind a North Korean leader, Gordon said. Stability is critical because the north has nuclear weapons, the further development of which those nations would like to see limited.

While instability and war represent the darkest outcomes for a botched succession process, modernization and economic reform are possible positive outcomes, panelists said. China, which provides a large percentage of the country’s power and food, is hopeful that the north will undergo a Chinese-style economic awakening, Saich said. Russia is also hoping to see economic reforms, Kramer said.

All that is in the hands of the new regime, which Eckert said may have been better prepared for succession than some give it credit for. One fear voiced about the accession of Kim Jong-un to power is that he has not had a lot of time to consolidate his own clout, unlike his father, who was groomed as a successor to the nation’s founder, Kim Il-sung, for 20 years.

Though the process would have been invisible to outsiders, Eckert said that Kim Jong-il’s 2007 stroke may have sounded a warning that put preparations for succession in motion, meaning that Kim Jong-un may have a stronger grasp on power than it might appear.

“The rapidity with which the North Korean state has embraced Kim Jong-un suggests plans have been in place for some time,” Eckert said.

Eckert, who said the succession process seems to be proceeding well so far, also said that North Korea’s elite, who are taken care of by the regime, have a lot to lose if the government destabilizes.

Though it has communist roots and has been run as a dictatorship, North Korea may be best understood if thought of as a monarchy, Eckert said. A member of the Kim family has ruled the nation since its founding in 1948. In monarchical succession, if the bloodlines are right, it doesn’t matter how old the new ruler is or what he looks like. If the ruler is considered too young, a regent can be appointed to help run things. In North Korea’s case, Kim Jong-un, who is not yet 30, has a prominent uncle to help him.

Eckert warned, however, that North Korea remains such a closed country that all prognostications need to be taken with a large grain of salt.

“There’s a good need for some modesty and humility about what we can say,” Eckert said.