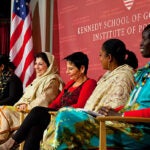 Over the past several years, Harvard University has been ramping up its involvement in India and South Asia, a trend exemplified by Harvard’s South Asia Initiative.

Tarun Khanna, the Jorge Paulo Lemann Professor at Harvard Business School (HBS) and an authority on developing nations, said the initiative was founded in 2003 to foster the University’s engagement in South Asia, a region with varying definitions but centered on India, Pakistan, and Bangladesh.

The region contains roughly a quarter of the world’s population and includes both India’s rising economic power and Pakistan’s strategic importance. So Harvard leaders recognized that the University’s efforts in the region needed to be encouraged. Harvard Business School has opened a regional office in Mumbai, where the South Asia Initiative shares space. The initiative has focused its efforts on five key interdisciplinary areas: urbanization, water, social enterprise, health and medicine, and “South Asia without Borders,” which is an umbrella effort focused on the arts, humanities, and social sciences, including a country-specific effort focused on Pakistan.

Each of those programs is headed by a senior faculty member from one of Harvard’s Schools, Khanna said, making the effort truly University-wide.

India ranks fourth in the number of students it sends to Harvard, behind only China, Canada, and South Korea, with 232 students studying here this year. Harvard has about 1,500 alumni in India.

Harvard’s understanding of the region’s importance will be highlighted by President Drew Faust’s visit to India in the middle of this month. Faust will address academic and other leaders at the University of Mumbai, will participate in an education symposium in New Delhi, and will host alumni events organized to mark Harvard’s 375th anniversary.

Faust is the latest Harvard leader to visit India. Charles Eliot traveled to India in 1911-12, though two years after stepping down as president. Sitting Harvard President Nathan Pusey visited India in 1961, delivering an address at the University of Delhi. Presidents Derek Bok and Lawrence Summers both visited India, in 1987 and 2006, respectively. Then-Provost Steven Hyman visited last April.

Harvard’s engagement in India has spanned decades and disciplines. Until recent years it has been guided mainly by the interests of individual researchers and programs, such as the Harvard Glee Club, which toured India in 1961, and the Radcliffe and Harvard College student groups that banded together in 1955 to sponsor efforts by University of Delhi students to improve rural development. Today, India presents the opportunity to study and learn about a range of critical issues, including the challenges of rapid urbanization, public health delivery in resource-poor settings, and water use.

More than 100 Harvard faculty members conduct research on South Asia on topics as diverse as the Indian fashion industry, development in India’s slums, health and aging, safe childbirth, the legacy of colonialism, and the Indian software industry.

There is an array of centers, programs, and courses focusing on the region, ranging from the Harvard Business School’s India Research Center to the Asia Center. The Center for Tropical Forest Science is conducting research on the region’s forests, while the University-wide Islamic Heritage Project is conserving and digitizing Islamic manuscripts, maps, and published texts. The recently renamed Department of South Asian Studies, formerly the Department of Sanskrit and Indian Studies, has a new undergraduate concentration in South Asian studies.

Harvard’s engagement in India and the region takes place in collaboration with local partners, researchers, and organizations, ensuring that there is two-way learning, with Indian scholars and fellows coming to Harvard to deliver lectures, conduct research, and engage with students.

At Harvard, engagement comes through student groups, lectures, conferences, and faculty research. In India, there are faculty research projects, student internships, and alumni activities, among others.

There has been a flurry of activity on the Harvard campus recently. A.P.J. Abdul Kalam, a renowned scientist who was India’s 11th president, visited to deliver the annual Mahindra Lecture. Khanna’s new Gen Ed course on South Asia’s long-term problems and their possible entrepreneurial solutions attracted students from across the University last semester.

Khanna said he expects the University’s involvement in the region to continue to increase “very dramatically.”