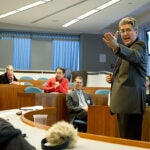 Over the past several years, Harvard University has been ramping up its involvement in India and South Asia, a trend catalyzed by Harvard’s South Asia Initiative, which was founded in 2003 to foster the University’s engagement in the region. Harvard’s understanding of the region’s importance is highlighted by President Drew Faust’s January visit to India.

The region contains a quarter of the world’s population and includes both India’s rising economic power and Pakistan’s strategic importance. Harvard Business School has opened a regional office in Mumbai, where the initiative shares space. The initiative has focused on five key interdisciplinary areas: urbanization, water, social enterprise, health and medicine, and “South Asia without Borders,” an umbrella effort focused on the arts, humanities, and social sciences.

India ranks fourth in the number of students it sends to Harvard, with 232 studying here this year. Harvard has about 1,500 alumni in India.