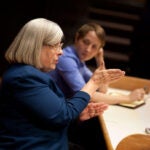 Trying to make sense of the breadth and complexity of the financial markets can be a Herculean task, one that frustrates even the most seasoned investors. Why, then, do many companies ask their employees to do just that?

They shouldn’t, according to Brigitte Madrian, Aetna Professor of Public Policy and Corporate Management at Harvard’s John F. Kennedy School of Government, and David Laibson, the Robert I. Goldman Professor of Economics.

In a paper published last year, Madrian and Laibson argued that employers should strive to “design institutions that facilitate good choices, rather than assuming that giving people every option under the sun will lead to the right decision.”

The paper, co-authored with James Choi ’98, associate professor of finance at the Yale School of Management, was recently honored with the TIAA-CREF Paul A. Samuelson Award. The annual award recognizes scholarly writing on lifelong financial security.

“The view I had when I started this study, and that I think a lot of economists have today, is that if you just make information salient, if you explain fees, people will understand what’s in their own self-interest and act accordingly,” Laibson said. “I’m no longer a believer in that story. My belief now is that if you give people bad options, even if you explain the characteristics that make them bad, many people will still choose those options.”

Understanding why people make bad choices, Laibson said, required an unusual experimental structure. Participants in the study were asked to allocate $10,000 across four S&P 500 index funds, and were paid according to how their investments performed.

For most people, Laibson said, investments are based on two considerations — how funds perform and the suite of services offered by an investment company. In this study, however, researchers were able to eliminate both, the first because index funds — designed to replicate an index set by the S&P — perform nearly identically, the second because the funds were administered by the researchers.

“Once you eliminate those two considerations all that’s left is what we wanted to focus on, and that’s fees,” Laibson said. “Given this experimental design, the ‘right’ answer is unambiguous; it’s the fund with the lowest fees.

“What we found is that the participants were, in essence, oblivious to fees,” Laibson continued. “A tiny fraction, less than 10 percent, did the thing that economists would say is the rational thing and put all the money in the lowest-fee fund. By comparison, the average fee that our participants paid was on par with — and in some participant populations well above — the fee they would have paid had they just thrown darts. Basically, they chased historical returns, they chased brand, and they ended up going for the funds that, by and large, had the highest fees.”

A variety of populations took part in the study, including Harvard staff members, Harvard undergrads, and students at the Wharton School of the University of Pennsylvania. Each time, Laibson said, the results were the same.

“When I first saw those results, I thought it was because participants weren’t seeing the fees,” he said. “We gave them the prospectus for each fund, but the prospectus is 40 pages long. Maybe they’re not taking the time to find the page that describes the fees.”

Said Madrian: “This research shows that individuals aren’t using the right types of information in making mutual fund investment decisions. They place too much weight on past returns, and too little weight on potentially important factors like fees.”

In the study’s second arm, the experiment was repeated, but in addition to a full prospectus for each fund, participants were given a one-page sheet that detailed the fees for each fund.

“When we introduced intervention like this, we saw minuscule changes,” Laibson said. “There was a change in the right direction, but it was very, very small, and even after giving participants this clarifying information, they still did worse than they would have had they thrown darts. The same message keeps popping up, which is that people seem to not comprehend what fees imply and they don’t fully understand these assets that we would say are the bedrock foundation of a retirement savings portfolio.”

That lack of understanding could potentially have serious impacts later in investors’ lives. Over a lifetime of accumulation, Laibson said, an extra percentage point in fees will translate into balances that are 20 percent smaller.

“Employers have a choice,” he said. “They can do what they were doing in the ’90s, which was to give employees in retirement plans 400 investment options and say, ‘We’ve done our job.’ Or employers can recognize that many employees will choose poorly even if they have lots of information.  Inferior options, like high-fee funds, should simply not be on the menu.”