The wisdom of William James 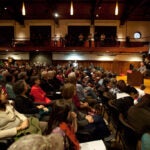 William James, an American philosopher who died more than a hundred years ago, still matters. In fact, a keynote speaker said, he is just what the doctor ordered.

In a lecture on Monday, physician and Harvard Medical School Professor Arthur Kleinman discussed the importance of living a fulfilled life based on a deep “moral wisdom,” one illuminated in the writings of James, and the need for such insight in the academic realm.

As context for his 2011 William James Lecture at Harvard Divinity School, Kleinman, Rabb Professor of Anthropology in the Faculty of Arts and Sciences, described two crises in his own life, a turning point in his professional career more than 40 years ago, and the recent loss of his wife of almost half a century.

The events were connected by an old journal yellowed with time. On its pages were pithy comments from 20th-century continental philosophers, compiled by a young Kleinman when he served in Taiwan as a U.S. Public Health Service officer and a National Institutes of Health fellow from 1969 to 1970. Struggling then with the decision to leave his primary care clinic in favor of anthropological fieldwork and psychiatric practice, he searched the copied words for “an intellectual and … moral foundation.”

Kleinman returned to the diary after the death of his wife Joan, “while struggling to come to terms with a great sadness, oscillating with aching yearning,” and he drew parallels to those two times of intense uncertainty. “I needed, in both periods, reassurance, confirmation that the very grounds of who I was and what I was doing were real.”

But with reflection, Kleinman realized that the running file of philosophical entries couldn’t offer up a “deep wisdom” that would help him face life’s extreme challenges.

He ultimately understood that he was asking the wrong question of the philosophy writers, he said, searching their words to understand “experience as a philosophical problem” instead of “experience as practice.” Only in his role as mentor, caregiver, doctor, and teacher has he come closest to the end of that vital quest, he said, through a practice involving action among and for others, what he called “the very art of living.”

“My search for wisdom had been a largely unfulfilled quest, but as in the case of caregiving,” he said, “not an unfulfillable one.”

Still, his search has been informed in large part by the work of James, the groundbreaking scholar, author, and philosopher considered by many the father of American psychology.

For four decades, Kleinman said, James’ prose has aided him with a type of creative back and forth, “from metaphor to rhythm of words, to findings from experience, to major conclusions relevant to my life.”

For Kleinman, James became a kind of “intellectual interlocutor who could come right down into my experience and illuminate it from within.”

“If this life be not a real fight, in which something is eternally gained for the universe by success, it is no better than a game of private theatricals from which one may withdraw at will,” read Kleinman from James’ “The Varieties of Religious Experience.” “But it feels like a real fight — as if there were something really wild in the universe which we, with all our idealities and faithfulnesses, are needed to redeem.”

In dealing with the loss of his wife and the “fierce and joyful love” they shared, Kleinman again turned to James. The wisdom that Kleinman needed to address his grief “came out of my readiness to respond to James’ pushing, at a certain time when I was faced with a problem central to the human condition.”

That engagement, said Kleinman, helped him to understand that wisdom needs, above all, to be experienced and is most useful as a “moral practice that redeems our humaneness amidst the inevitable disappointment and defeat.”

For Kleinman, James’ take on religion and its relationship to “quests for wisdom” offers similar insights and deserves further academic study.

In the face of the uncertainty of the human condition, people turn to religion, said Kleinman, noting that James “saw religion, like philosophy, as a resource for getting through life,” and a way of fortifying the human spirit “not to be afraid of life.”

James and his understanding of the “human uses of religion … needs to become more a serious source of interdisciplinary academic discussion,” said Kleinman, “that bridges the study of religions, the social sciences, and the humanities, as well as the helping professions.”