When to help a patient die 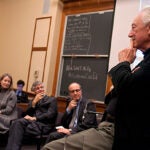 The import of civic education

Legal analysts at a Harvard Medical School (HMS) forum differed during a discussion Thursday evening on whether a law allowing death with dignity or assisted suicide for terminally ill patients is right for Massachusetts. But they agreed that similar laws in Oregon and Washington have not proven to be a “slippery slope” that endangered vulnerable patients.

Massachusetts Attorney General Martha Coakley has certified a ballot initiative for next November that, if passed, would enable a physician to write a prescription for a lethal dose of medicine if a terminally ill adult who is mentally competent asks for it.

Proponents had until Dec. 7 to gather the needed 68,911 signatures in support of the measure to have it qualify for the state ballot.

Speaking at an HMS medical ethics forum, Boston College Law School Professor Emeritus Charles H. Baron said that, in Massachusetts and many states, physicians are criminally liable if they accede to the wishes of a mentally competent patient for whom there is no hope of recovery. The proposed law would provide clear guidelines to medical professionals, would protect patients in advance rather than prosecute a caregiver who aids in a death after the fact, and would provide transparency through regulation.

“What has been the experience in Oregon and Washington? All of the horrors that were predicted have not come about,” said Baron, who helped write the friend-of-the-court brief for one of two 1997 U.S. Supreme Court cases that challenged the constitutionality of prohibitions against physician-assisted death.

A report is issued every year by a public health entity in Oregon, where the law has been on the books since 1994. Of 65 patients who died under the act in 2010, none was a minority, all were well-educated (42 percent had at least a bachelor’s degree), 97 percent died at home, and 93 percent were receiving hospice care, Baron said.

Former nurse Barbara Coombs Lee, who defended Montana’s 2007 statute before that state’s supreme court, said, “The lesson of Oregon is that it is not suicide.’’ In fact, she said, the law against assisted suicide is still on the books in Oregon, and it’s still a felony. In Montana, she said, “The Supreme Court repeatedly labeled the medical practice aid in dying, and declared it consistent with public policy.”

Coombs Lee said that in an overwhelming number of cases the patients feel much better just having the prescription and knowing that if their pain becomes unbearable, they have a way out. Doctors who write prescriptions do not intend to cause a suicide, she said. Their prescriptions may never be filled.

“One-third to half of the patients never take the prescription,” and those who do take it do so at the very last moment. “They don’t take it when they are walking around shopping. But it accomplishes comfort to have the prescription,” said Coombs Lee, president of Compassion & Choices.

Statistics show that the vast majority of the patients who want to have the lethal prescriptions suffer from cancer, followed by Lou Gehrig’s disease, more formally known as Amyotrophic lateral sclerosis. None of the laws currently in effect allows a patient to sign a request in advance of contracting a terminal illness or a neurologically degenerative diagnosis such as Alzheimer’s.

Opposing the law was Boston University Law Professor George Annas, who helped to create the health care proxy law in Massachusetts. Annas said the problems he predicted in Oregon and Washington have not come to pass. But that does not mean the assisted-death law is a good idea for Massachusetts.

“I don’t think we should give doctors immunity,” Annas said. “But there’s nothing wrong with prescribing drugs that can relieve pain, or to sleep, and tell them how much they need to die.”

The forum’s moderator was HMS senior lecturer Marcia Angell, a past editor of the New England Journal of Medicine, who said physicians are helping the terminally ill die despite the personal risk.

“According to anonymous surveys, all doctors help even though the AMA [American Medical Association] and others say it’s illegal.”