Use, abuse of Internet pharmacies 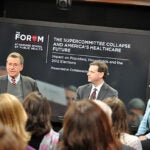 Health reform in the crosshairs

Efforts to halt the growing abuse of prescription drugs must include addressing the availability of these drugs on the Internet and increasing physician awareness of the dangers posed by Internet pharmacies.

In a commentary in the Dec. 20 Annals of Internal Medicine, investigators from Harvard-affiliated Massachusetts General Hospital (MGH), the Schaeffer Center for Health Policy and Economics at the University of Southern California (USC), and The National Center on Addiction and Substance Abuse at Columbia University (CASA Columbia) describe the probable contribution of Internet pharmacies to the problem and outline potential strategies for addressing the problem.

“Controlled prescription drugs like Oxycontin, Xanax, and Ritalin are easily purchased over the Internet without a prescription, yet physician awareness of this problem is low,” says Anupam B. Jena of the MGH Department of Medicine, lead author of the article, and a clinical fellow in medicine at Harvard Medical School.  “Abuse of medications purchased from websites can pose unique challenges to physicians because patients who abuse these medications may not fit clinical stereotypes of drug abusers.”

“The Internet serves as an open channel for distribution of controlled prescription drugs with no mechanisms to even block sales to children. This is particularly dangerous given that addiction is a disease that, in most cases, originates with substance use in adolescence,” says Susan Foster, vice president and director of Policy Research and Analysis at CASA Columbia.

Additional investigations by U.S. agencies have verified the ease with which controlled drugs can be purchased online, but little information is available on how drugs acquired that way are used.  While some surveys suggest that as many as 10 percent of prescription drug abusers obtain their drugs online, the authors stress that such surveys probably underestimate the situation and would not reach individuals most likely to abuse prescription drugs purchased over the Internet.  They also note that surveys in drug treatment centers would totally miss local drug dealers, who are increasingly likely to access their supplies online.

Earlier this year Jena and Dana Goldman, director of the Schaeffer Center at USC and also a co-author of the current article, published a study finding that the states with the greatest expansion in high-speed Internet access from 2000 to 2007 also had the largest increase in admissions for treatment of prescription drug abuse.  They estimated that for every 10 percent increase in high-speed Internet use during those years, admissions for prescription drug abuse increased 1 percent.  “Prescription use starts with the physician,” says Goldman, “and we need to more actively engage them to control illicit use.  Access to universal, electronic prescription records would be of great assistance in this regard.”

Both federal and private agencies have taken measures to reduce the impact of illicit Internet pharmacies, including the 2008 passage of the Ryan Haight Online Pharmacy Consumer Protection Act, which specifically prohibits delivery of controlled substances prescribed by a physician who had never examined the patient.  But the success of that law and related efforts, such as FDA warning letters to Internet pharmacies and their service providers, is unknown.  The authors note that regulatory efforts also are “stymied by these pharmacies’ ability to appear, disappear, and reappear constantly,” and the reluctance of search engines to stop running ads for rogue online pharmacies.  The increasing online availability of prescription drugs may entice individuals believed to be at low risk for drug abuse to overuse controlled medications.

The authors note that, while physicians and other health care providers should play a major part in addressing the challenges posed by Internet pharmacies, their awareness of the problem and ability to recognize and treat substance abuse of any kind is usually limited.  “Physicians need to educate patients about the risks of purchasing any medications over the Internet and should consider brief but routine questioning about Internet-based medication use,” says Jena, who is also a senior fellow at the Schaeffer Center at USC.  “Given the ability of illegal online pharmacies to evade law enforcement efforts, physician awareness and involvement will be crucial to reducing this problem.”