The defense of Ebenezer 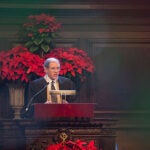 Prayers for the season

“A Christmas Carol,” the transformative tale by Charles Dickens about the ill-tempered anti-hero Ebenezer Scrooge, is for many an integral part of the literary Christmas canon.

Yet few of those familiar with the work likely have heard of its entertaining counterpart, a brief work penned decades ago by a popular Harvard professor. But if listeners tune in to Harvard’s student-run radio station WHRB (95.3 FM) tomorrow evening (Dec. 23), they will hear the late Professor David Owen deliver “In Defense of Scrooge,” his humorous and historic ode to the iconic novella.

The broadcast, part of the station’s annual holiday programming on Friday from 7 to 10 p.m., will be preceded by a recording of the original “A Christmas Carol,” starring actor Lionel Barrymore as Scrooge.

Owen’s work became a festive holiday tradition at Winthrop House because of his wry wit and insightful intellect. Winthrop’s longtime House master, Owen was also the Gurney Professor of History until his death in 1968. Originally composed by Owen for a Signet Society Christmas dinner, his reading became an annual tradition at the House.

“Every year … as part of the entertainment, he would get up and deliver his ‘In Defense of Scrooge,’” said David Elliott ’64, who was the station’s program manager when Owen recorded his ode in 1961 at the suggestion of station member and Harvard alumnus Fred Safier ’63. “It’s a history of Christmas customs given in the framework of defending Scrooge, and he did it in a very warm and amusing way … with a distinctive delivery style.”

According to Elliott, the recording, which ran occasionally after its initial broadcast, hasn’t been broadcast in some time. Eager to mark the 50th anniversary of the work’s airing, Elliott, who is the chairman of the trustees of the station and host of the annual Christmas show, suggested that the current station manager air it again.

“It’s really a great piece, and it’s a tribute, I think, to Professor Owen, who … was clearly an important figure in the history of our house,” said Charlie Hobbs ’13, who recently became the general manager at the station and was happy to rebroadcast the piece. “One of the proudest things that we are able to do, as the student radio station at Harvard, is to broadcast Harvard traditions.”

Owen argues in his essay that the world’s most famous Christmas curmudgeon was possibly onto something. Given to indigestion, Scrooge was a man of moderation and wasn’t inclined to overindulge in the type of “marathon eating” common at parties and holiday dinners of the Victorian Age. And one could hardly blame the poor man for trying to avoid a fete where the “bouncing” hostess, his nephew’s wife, was the type “determined that all should have a good time whatever the consequences.” Those parties, mused Owen, were the “beginning of the road that would lead to the office party.”

One of the three pesky specters in the story, said the professor, deserved its fair share of blame for not painting an accurate picture of pageantry and commercialization of Christmases yet to come. “Did the ghost,” Owen wondered, “hint that each December 1, Harvard Square would suddenly come out bedizened and bejeweled like an ancient cocotte still hopeful of a comeback?”

“What he is saying is that Scrooge was right to resist what would develop into excessive and commercialized displays of supposedly Christmas-related celebration,” said Elliott.

In reviving the broadcast, Elliott hopes listeners will revel in the clever prose and historic detail, while remembering a well-loved Harvard scholar.

“He was such a warm and admired figure at Harvard at that time. We want to remember him while we are enjoying the detail and the spirit of his ‘Defense of Scrooge.’ ”