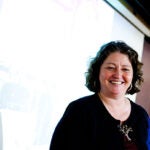 Tofu pâté, sinking ice, and all-egg noodles replaced the usual fare in Annenberg Hall on Monday, at the second incarnation of Harvard’s most delicious science fair.

This year, 63 teams presented a great variety of culinary creations. Chris Lehman ’13, a social studies concentrator, and James Danner ’12, history and literature, attempted to re-create the texture, flavor, and acidity of a fresh raspberry in a spherified liquid form. Their classmate, Paul VanKoughnett ’12, a mathematics concentrator, optimized the bubbliness of angel food cake. Most of the students who take the course do not intend to concentrate in science or engineering.

The “Science & Cooking” course brings world-famous, innovative chefs to Harvard to give guest lectures on specific aspects of scientific theory and culinary practice. (A separate series of public lectures is available online.)

Through the chefs’ demonstrations of sweet treats such as chocolate mousse and savory staples like steaks, students learn about colloids, rheology, and heat transfer. They then apply that knowledge in lab activities throughout the term and share their final projects with members of the Harvard community who can see a semester’s worth of learning and, in most cases, taste the results.

“The projects are great,” said course instructor David Weitz, the Mallinckrodt Professor of Physics and of Applied Physics at Harvard’s School of Engineering and Applied Sciences (SEAS). “We’re convincing people who are not necessarily motivated to study science to actually enjoy it, and that’s what I call success.”

“They’re also learning to ask scientific questions, and none of them are afraid of equations now,” he added. “In fact, they cheer every time they see the equation of the week.”

Many of the guest chefs returned to serve as judges at the Science & Cooking Fair. The top award, for “most creative project,” was presented by acclaimed chef Ferran Adrià to a team that produced a non-liquid rum-and-coke cocktail in two phases. A few of the other awards included:

The difference between the final projects and the work done in the lab during the semester, said Weitz, is that “nobody knows what the results are before they start doing the project.”

“That’s what real research is about,” he explained. “The point is to have them informed as citizens, if they’re not scientists — to have them appreciate what science is about.”