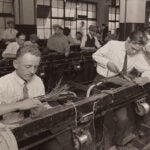 Rethinking work, beyond the paycheck

By Harvard Institute of Politics

A new national poll of America’s 18- to 29-year-olds by the Institute of Politics (IOP) at the Harvard Kennedy School finds more millennials predict President Barack Obama will lose his bid for re-election (36 percent) than win (30 percent).

“Our new polling data clearly shows millennials are growing more concerned over the direction of the country and effectiveness of Washington, D.C., to solve problems,” said IOP Director Trey Grayson. “The opportunity exists for all political parties and campaigns to re-engage this generation — those who do can maximize results in 2012.”

“While we are more than a year away, this survey may well serve as an ominous sign for Barack Obama’s 2012 chances and the political engagement of America’s largest generation,” said John Della Volpe, IOP polling director.

The Web-enabled survey of 2,028 18- to 29-year-old U.S. citizens had a margin of error of +/– 2.2 percentage points (95 percent confidence level) and was conducted with research partner Knowledge Networks for the IOP between Nov. 23 and Dec. 3. The findings follow:

Mitt Romney leads among young Republican primary and caucus-goers. Among young Republican and Independents indicating they are at least somewhat likely (definitely, probably, or 50-50) to vote in their state’s primary or caucus, Romney leads the field with 23 percent, followed by Ron Paul, 16 percent, Herman Cain, 15 percent, and Newt Gingrich, 13 percent. Examination and allocation of Cain supporters’ second-choice selections for president shows Romney would continue to lead (25 percent) among millennials with Cain out of the race, with Ron Paul (18 percent) and Newt Gingrich (17 percent) in a statistical tie for second place. (Herman Cain suspended his campaign on Dec. 3, the final day of the interviewing period for the IOP’s fall poll.)

Job approval ratings continue to slide for Obama as well as Democrats and Republicans in Congress. Obama’s job performance rating among America’s 18- to 29-year-olds is currently at the lowest point since IOP polling of the Obama administration began in the fall of 2009. Forty-six percent of millennials approve of the job Obama is doing as president — a decrease of 9 percentage points from February 2011 IOP polling (55 percent) — with 51 percent saying they disapprove. Obama’s job approval has also fallen among college students from 60 percent in February to 48 percent today. Views toward Democrats (33 percent approval; down from 45 percent in February) and Republicans in Congress (24 percent approval; down from 30 percent in February) have also slipped significantly over the same period.

By a margin of more than 4-1, millennials believe U.S. is headed in wrong direction. Only 12 percent of young Americans believe things are “headed in the right direction” with 52 percent saying things are “off on the wrong track,” a more pessimistic view than identified in February 2011 IOP polling (20 percent: “right direction,” 39 percent: “wrong track”). Importantly, less than one-third (32 percent) of 18- to 29-year-olds approve of the way that Obama is handling the economy, a 10 percentage-point drop since February IOP polling (42 percent).