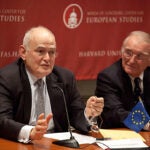 Sonya Soni, a Harvard Divinity School student, is featured in the documentary “Keep a Child Alive with Alicia Keys,” which airs throughout December on Showtime.

Soni, who is studying the moral economy of global health and human rights for orphaned children in India, said it is the work being done in South Africa with the nonprofit organization Keep a Child Alive, that is the focus of the film.

“Keep a Child Alive” addresses the health and social needs of HIV-affected orphans in both India and South Africa. The documentary portrays the journey of five students, including Soni, and the organization’s co-founder, musical artist Alicia Keys, from the students’ school campuses to the villages of South Africa.

The students and Keys visited Keep a Child Alive-funded sites in Johannesburg and Durban.

The documentary airs today at 5:15 p.m. on Showtime, with additional viewings throughout December.