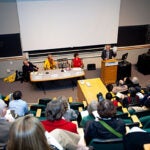 When to help a patient die

A Pakistani journalist explains the dangers of his trade

Pir Zubair Shah, a Pakistani journalist who shared the 2009 Pulitzer Prize for international reporting, is a Nieman Fellow at Harvard this year. He has a Green Card in his pocket, has a master’s degree in foreign policy, and speaks seven languages, including Pashto, Punjabi, and Urmari, the language of his tribal boyhood. When Shah was a reporter for The New York Times, more than half of his stories appeared on the front page. And today (Dec. 15) is his 34th birthday. Life is good.

But things could have turned out differently.

In 2007, while reporting for Newsday, Shah set out for a village in his homeland of South Waziristan, the mountainous region in northwest Pakistan famed for its volatility. (It borders Afghanistan and harbors its own Taliban fighters.) Before reaching the village, he got a warning: Turn back.

Shah drove away, but then saw someone emerge from the darkness, a bearded man carrying a walkie-talkie and an AK-47. They looked at each other — the trim cosmopolitan journalist and the Taliban fighter — with recognition and shock. “We used to play together,” said Shah of their shared village boyhood. “This guy had now become a commander. He had found a purpose.”

It was a familiar story of fateful divides and divergent worlds in tribal Pakistan. “That’s what you want as a young guy — a vehicle, a gun, and some status,” said Shah. “I could have been the same.”

Instead, Shah was drawn to journalism after preparing for a foreign-service career — convinced that his mission was to report on a part of the world that is little understood. “No one knows anything about our area,” he said of the Waziristan region, which has a fierce warrior ethic and rugged terrain. “It’s all stereotypes.”

Even Pakistanis fear to go there now, and foreign journalists are banned, he said, adding,  “No one had access. But I had access.” Shah slipped into the tribal areas to report on drone attacks, Taliban economic activity, police recruiting, Taliban terror campaigns in the Swat Valley, and the extrajudicial killings that he said followed a Pakistani military sweep of the same area.

Shah fled Pakistan last year, more afraid of reprisals from the government for his reporting than from the Taliban. “I can’t go back; it’s too dangerous,” he said. “You can’t protect yourself from the state. They’re everywhere. They go everywhere with impunity.”

In his years of reporting from Pakistan, Shah said the danger was continuous for reporters working along the fault lines of a politically volatile country. Fellow journalists and friends of his were tortured, he said, and one was killed. In 2008, he was held by the Taliban for five days, released unharmed, and then detained by Pakistani government interrogators for three more days.

With all that behind him, there is for now Harvard, a place he never dreamed of being. “When we first arrived,” said Shah of his Nieman class, “we were told Harvard is a candy shop. After some time, I realized it’s true,” and he is taking advantage of its offerings.

This semester, he is auditing classes at the Harvard Kennedy School on media and politics; human rights tools for practitioners; and American foreign policy decision-making in Iraq, Afghanistan, and Pakistan. He also is taking a course on narrative writing to sharpen his storytelling. “Every moment I reported has a story behind it,” he said, but “English is not my language. It takes time.” His plan for next semester is to explore courses in law, business, and divinity.

While he learns, Shah is also willing to share. In November, he was a guest in two successive morning sessions of “The Voice of Authority,” a freshman expository writing class taught by novelist and veteran preceptor Jane Unrue. She’s a member of Harvard’s Scholars at Risk Committee and has a special interest in writers who face danger in their home countries.

“The questions were good,” said Shah, “what I would expect from real journalists.” Students asked him about trust, bias, competition, sources, social media, danger, and the personal costs of reporting from a country like Pakistan.

He was especially quick to answer the last: His reporting cost him access to his homeland. “I am paying the cost of being outside my country,” said Shah.

But he added, “what I do will have a big impact in the long term.” For the world, the cost of not reporting accurately from a capricious and nuclear-armed Pakistan is too high, said Shah. “The consequences are so dire. You need to be informed.”

And the quality of international journalism “depends on the quality of local reporters,” he said. You have to know the language, follow the customs, and look the look. Some days, Shah dressed up for an embassy reception, but later donned a dastar and shalwar kameez to visit a local madrasah. “You can’t go with a clean shave and a tie and a suit,” said Shah of Islamic religious schools. “No one will talk to you.”

As a boy in tribal South Waziristan, Shah watched firefights, carried a gun at the request of his village elder father, and witnessed the dancelike battle cry that is a Pashtun custom. As a reporter, he took late-night calls from intelligence agents, sorted through missile fragments at attack sites, counted bodies and graves, interviewed suspected suicide bombers, came under small-arms fire, and watched drones chatter 5,000 feet overhead. (“They sound like bees,” he said.)

But in the November writing class Shah was glad to meet students who are free to study, exchange ideas, and live in peace. He said later, “I wanted them to be as innocent as they are.”