A spotlight on China 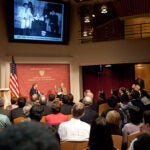 The ripple of fiscal problems

It was a solar lantern headed for India, oddly enough, that brought Harvard senior Rachel Field to China last summer.

As part of an independent research project through the D-Lab at Massachusetts Institute of Technology, Field helped to design a solar lantern that uses low-cost technology in the developing world. The project’s goal was to design a lamp that could be built and sold by a community group in the Himalayan mountains area of India. The project was successful, Field said, and piqued her curiosity about China after her partners kept inquiring whether they could build the lantern with Chinese parts, because of their low cost and the country’s extensive distribution network.

Field, an engineering concentrator, decided she wanted to know more about the giant Asian nation. So she turned to the Harvard China Fund. Last summer, Field was among a handful of students who had internships in China, aided by the fund in collaboration with companies there. Field wound up at Sealed Air, an American company that has a plant in Shanghai. Over the internship’s 10 weeks, she not only got a taste for life and work in China, she also designed two devices to be used on the assembly line.

“It was an amazing opportunity,” Field said. “They customized an internship to my interests. I reported to the head engineer.”

Established in 2006, the fund supports China-related programs across Harvard’s campuses and promotes everything from student activities to faculty research in China. Over the past four years, 157 students have traveled to China for internships that were arranged and supported by the fund.

China Fund chairman William Kirby, the T.M. Chang Professor of China Studies and Spangler Family Professor of Business Administration, said the goal is to encourage faculty and student engagement with China and to maintain a Harvard presence there. The fund does that through programs that include grants for faculty research — 17 have been awarded — support for student internships, efforts to bring Chinese fellows to Harvard, and sponsorship of activities on campus, such as a conference on public health planned for May.

In addition, together with Harvard Business School, the fund runs the Harvard Shanghai Center, providing a physical place for executive education classes, alumni functions, and for faculty, students, and researchers to work.

China is not only the world’s biggest country, it is also one of the globe’s fastest-growing and most dynamically changing places, making it not only an interesting nation in which to learn and conduct research, but also one that demands attention from any organization that considers itself an international institution.

“There’s a substantial feeling that [China’s global influence] will only grow,” Kirby said.

In 2007, when the Harvard Law School Project on Disability needed funding to begin a major project on disability in China, traditional sources were hard to find. The China Fund stepped in with a $160,000 grant. The project was seeking to raise awareness and increase programming for the disabled in China. Official estimates indicate there are 85 million disabled Chinese, but project co-founder Stimson Professor of Law William Alford said the actual number could top 200 million, more than the entire population of the United Kingdom.

“There’s a large amount of work to be done,” Alford said.

In the intervening years, Alford and Harvard Disability Project Executive Director Michael Stein have worked with Chinese government officials to draft laws and regulations. They worked with Chinese scholars to increase capacity around disability law and rights, establishing China’s first program on disability and the law at Renmin University.

“This [funding] allowed us to go forward with these projects,” Stein said.

The money also brought scholars to Harvard and backed an annual seminar for three years. Stein and Alford also worked to infuse teaching and learning on China and disability into their regular course work.

Alford said the programming that resulted from the three-year grant has paid off 10-fold. In addition, as word has gotten out about their work, the fund has been inundated with requests.

“We’re very grateful to the China Fund,” Alford said. “I feel the initial trust and investment in us has really borne fruit.”

Kirby said the fund is looking to expand its internship program. Next summer, internships at companies in China will be augmented with 15 new, service-focused positions at nonprofit organizations and nongovernmental organizations. The fund’s leaders also want to think hard about the areas where Harvard can make a difference in China, and target the University’s efforts there.