A show fit for royalty 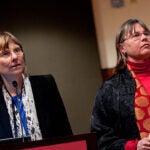 “The Snow Queen” is springing to life in magical, icy splendor this month on the American Repertory Theater’s (A.R.T.) Loeb Stage.

In the same spirit as that of the Muppets, the iconic puppets created by Jim Henson whose mayhem and mischief speak to children and adults, “The Snow Queen,” complete with its own set of enchanted puppets, engages audiences of any age with a clever and elegantly reimagined version of the classic fairy tale by Danish storyteller Hans Christian Andersen.

The new stage adaptation is the work of a group of students from the A.R.T. Institute, a two-year, graduate training program for aspiring actors and dramaturges. Institute student Tyler J. Monroe adapted the story for the stage.

Searching for a family holiday show, one that would attract theatergoers of any age, Allegra Libonati, an artistic associate at the A.R.T., turned to the mythical fable.

“It is such an amazing story; it’s epic,” said Libonati, who directs the new work. “It felt like it was a story that a lot of people were intrigued by but didn’t know really well, so it had a lot of potential to mold into a new dramatic interpretation.”

Andersen’s story, a timeless tale of good versus evil, centers on two young friends, Gerda and Kai. When a wicked sorceress captures Kai, Gerda embarks on a long, bitter journey to the North Pole to save him from the evil queen. Along the way, she encounters wild and wonderful creatures, including a talking reindeer, two kindhearted swallows, and a group of wood-dwelling bandits.

“The story captures the imagination of the kids and brings a message for the adults. That’s what Hans Christian Andersen loved doing, and that is what we were trying to do, too.” said Libonati.

Audience participation was an essential element for the show’s creators and is central to the family-friendly production. During the hour-and-a-half play, Gerda frequently turns to the audience for help, asking the crowd to dance, wave paper snowflakes and roses in the air, and even chirp loudly, to aid her quest.

Inventive staging lends an ethereal quality to the show. Competing for time and space on the A.R.T.’s main stage with the recently opened “Three Pianos” sent the show’s artistic team into creative overdrive. Fortunately, “The Snow Queen” ’s designers were able to piggyback on the concurrent production’s evocative winter set. Still somewhat constricted by space, the designers chose to use simple everyday items to further transform the stage.

“It forced us to be creative,” said Libonati. “We alighted on this idea of the ordinary transforming to become extraordinary right before your eyes, and the power of your imagination to create a new world.”

In that vein, white sheets and cloth become swirling snow, and an uncovered mattress instantly, and convincingly, morphs from a bed to a sleigh.

Adding to the magic is the artistry of actor Michael Kane, the grandfather narrator who, like most of the other actors, also weaves in and out of many roles throughout the performance. In addition to being an actor, Kane is a skilled puppet maker who has worked with the legendary activist group Bread and Puppet Theater.

Since August, Kane, with help from local children, has worked to create the mystical masks and puppets used in the show including the giant and beautifully eerie head of the evil snow queen.

The puppets artfully animate the supernatural world of fantastic animals and entities and “were integral to how we wanted to tell the story,” said Libonati.

After the opening performance Saturday (Dec. 10), the fun continued in the hallway outside the theater as the actors mingled with the crowd. Cast member Milia Ayache chatted with two young fans, helping them try on her wild wig made of multicolored yarn.

“This isn’t the best way to make friends,” she joked with some third-grade students, pointing to her fake knife, a prop she uses as one of her many characters in the play, the gruff but lovable “Robber Girl.”

In preparing for the production, Ayache and her cast mates used the acting techniques learned during their spring semester graduate studies at the Moscow Art Theater School in Russia. The work was part of the institute’s close collaboration with the Moscow Art Theater School, which includes a three-month residency in Moscow. Students who graduate from the A.R.T. program also receive a master’s degree from the renowned Russian theater school.

Watching members of the Russian institute take their children-oriented productions just as seriously as they approached works such as Shakespeare’s “Hamlet” was a revelation, said Ayache, and inspired the A.R.T. troupe to do the same.

“We never talk down to kids,” said Ayache, adding that for many young members of the audience the A.R.T. production would be their first exposure to theater. “We are building citizens. Theater builds citizenship.”

It was clear that the first run of the show already had built a legion of citizen fans of many ages.

“It was awesome, just awesome, even for an adult,” said Lynn Rose, who made the three-hour trip from Rutland, Vt., to see the play and hear the work of her son, Aaron Mack, the show’s sound designer.

Seven-year-old Cambridge resident Jasenina DeJesus, who attended the show with her mother and 5-year-old sister, Janelle, captured the spirit of the production with three simple words.

“That was fun!” she said as the lights came up.

The show runs through Dec. 31.