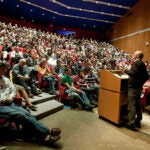 Harvard Writers at Work explores the power of writing

Don’t forget the laptop. If you are at Harvard in any capacity, chances are you write at least occasionally for a living. And all around you are people who do it all the time.

Hey presto: the Harvard Writers at Work lecture series, a program now in its third year. The intent is to “explore the power of writing at Harvard, and beyond,” said Thomas Jehn, Sosland Director of the Harvard College Writing Program, a series co-sponsor.

The other sponsors are the Harvard Review, the Program in General Education, and the Harvard Extension School. Speakers since 2009 have included writing luminaries Paul Harding, Jill Lepore, and Tracy Kidder.

This fall’s offerings so far: a panel of three high-speed travel writers (they traveled to Harvard for the event); Harvard Internet whiz Jonathan Zittrain; and the power-writing duo of Jerome Groopman and Pamela Hartzband, who both work at Harvard Medical School.

Traveling for a living

Jehn introduced the first lecture of the season, an Oct. 4 panel of travel writers. “There’s a selfish reason,” he said, explaining the topic. “I don’t get out much.”

The writers certainly do. Josh Dean, a Brooklyn, N.Y., freelancer, has snowboarded in Iran and played World Elephant Polo in southern Nepal. Danielle Pergament, a magazine writer living in New York, has posted stories about Italy (where she once lived), Patagonia, Maui, Mexico, and more. Adam Sachs is a New York travel and food writer whose occupational destinations have included Paris, Tokyo, Tasmania, and Easter Island.

But glamour did not come first. All three described their origin stories as travel writers and a common thread was: First, you pay your dues. Sachs started as a fact checker at Condé Nast Traveler. Dean, a graduate of Wittenberg University (“It’s the Harvard of southwestern Ohio,” he said), started for a teen magazine writing shorts about Brittany Spears and Buffy the Vampire Slayer. It was, he said, “timeless work.” Pergament — now a frequent contributor to The New York Times — aspired be a travel writer, but “my dues were (to be) a beauty and fashion writer for way longer than I wanted.”

Even now the glamour of travel writing has its downside, she said: It’s work. “You’re always thinking of a new angle,” said Pergament, “even if you’re at a spa in the most beautiful place on Earth.”

There are other pitfalls. “There’s probably no genre,” said Dean, “that lends itself more to bad writing.” For one, beauty and ease get in the way. “There’s nothing harder to write about than a perfectly nice day at the beach,” said Sachs. “There’s no narrative.”

But all three writers agreed on a solution: Write about people. “Stories are always about people,” said Dean, “even though they’re about places.”

On the darker side

Lawyer and digital futurist Jonathan Zittrain, in an Oct. 6 Thompson Room lecture, had a darker take on modern writing: Too much of it, increasingly, is done by someone else, he said. And that someone else might even be software. His talk, aptly, was “The Future of Writing — and How to Stop It.”

Zittrain, co-founder and co-director of Harvard’s Berkman Center for Internet & Society, pointed to a British academic writing service that sells finished papers outright. “You have found it!” the company website enthused on a screenshot. “It’s time to lean back and relax.” Go very far this way, Zittrain said, and getting through college will require just drinking a few beers and taking long naps.

Aside from outright fraud, there are Internet-based services that will vet your school paper for plagiarism and others that will edit your work line-by-line, tightening and correcting. “It’s somehow different than spell-check,” said Zittrain. “More and more of what we do [as writers] will be mechanical.”

Even literally. One site, www.sagrader.com, gives immediate automated feedback on submitted written work, all thanks to artificial intelligence. “It suggests the world we are getting into,” said Zittrain. “That’s the future of writing that terrifies me.”

But “there is still a here here,” he said. “There is still hope.” One sign is Wikipedia, the cloud-edited information source so often maligned in academic settings. “It’s a travesty that an academic sees Wiki as a source of plagiarism, and nothing else,” said Zittrain. Instead, Wiki compiles points of view and promotes a busy intellectual exchange. “It’s peer review,” he said, “in a way that peer review in scholarship has fallen behind.”

There are systemic problems behind bad academic writing or Internet abuses of the same, said Zittrain, including the quality of writing assignments, and the low expectations for creativity and genuine communication such assignments imply. Maybe bringing back small seminars is one solution — intimate settings in which a lack of clarity stands out, along with cheating, he said. “That’s where plagiarism gets neutralized.”

Doing the hard work of writing is no issue for the two authors featured in the most recent series lecture — a Nov. 14 look at collaboration in the Thompson Room.  Jerome Groopman and his wife, Pamela Hartzband, both teach at Harvard Medical School and Beth Israel Deaconess Medical Center. (He is the Dina and Raphael Recanati Professor of Medicine; she is an assistant professor of medicine.)

They co-authored the recent “Your Medical Mind” (Penguin Press, 2011), which explores the decision dynamics between doctor and patient. (Are you a minimalist about treatment, or a maximalist who wants everything, and fast? Are you aware of how stories — anecdotes of illnesses and outcomes — influence you and your physician?) They have also co-authored studies in the New England Journal of Medicine. As writers, they illustrated authorial collaboration in the presentation itself, a seamless back and forth from one voice to another.

They made collaboration sound like fun: daily walks to talk over the shape of a chapter; her initial detailed outline; his first draft — and their alternating drafts after that. The many drafts toned down his expansive writing, and filled out her terser approach — in the end producing a book with “an intermediate style,” said Hartzband. Before any writing began, they also shared research tasks and co-conducted the lengthy interviews the book required. “There was a lot of togetherness in this,” she said.

In the writing game, even a power couple has to pay dues — just like the trinity of travel writers from the first series lecture. Before his first book was published, said Groopman, 11 agents turned him down. One wrote back, he said, “Dr. Groopman, you are no Michael Crichton, you are no Oliver Sacks.” Today, his story count with the New Yorker — a writer’s writer magazine — is 64.

One key to success, said Groopman, was “rewrites with my expos instructor.” He looked over at his wife.