Travel as its own education 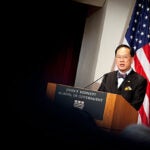 Visiting other lands has helped to shape undergrad’s experience

As the doors opened, I was thrust out in a tide of briefcases and stilettos. Bracing myself for the eight-minute walk to my next train, I stepped onto the escalator and began to soak in the surreal and quintessentially London scene before me: the captivating advertisements for musicals in the West End, a fleeting glimpse of a red double-decker bus on the street outside — until a deep cockney accent brought me out of my daze.

I hopped to the right just in time to see a burly gentleman rush past me in a dark suit. Several others followed. Flustered, I turned to the man directly behind me. He shrugged and gestured ahead.

“Stand to the right. Walk to the left.” His bemused smirk told me it was obvious. He turned back to read the front page of the Metro.

Scanning the area, I realized that each of the seemingly mile-high escalators was identical, with a solid line of “standers” on the right and a parallel, steadily flowing stream of hurried passengers on the left. Somehow I had missed the memo. Reaching the ground level, I laughed it off and rushed to catch the 8:41 to Denmark Hill.

This embarrassing but otherwise inconsequential experience came back to me at key points during my time in London this past summer. I had trouble shaking the sense that I was disconnected from my surroundings. Furthermore, I became acutely aware that I was just another person among hundreds passing through the station that morning.

After some initial hesitance, I began to cling to that feeling for dear life. The result was a slight but certain shift in my mindset: Though I was in London to attend a seminar, my focus became not what I could learn or gain, but rather how I could engage and contribute.

Going forward, this new sense of anonymity gave me the freedom to interact with people, to ask questions, and to humiliate myself without fear of judgment. I was able to enjoy aspects of London beyond the superficial: the myriad opportunities available in the arts, the distinct, undiluted elements of foreign cultures, and the remnants of history that added a touch of majesty to every street corner.

This trip was not my only travel experience as a Harvard student. During the past year, I’ve been able to travel to Ghana with the Ahoto Partnership for Ghana (founded by Harvard alumni) and to Nicaragua as part of an MIT engineering course. I’ve developed a global outlook that motivates me to study languages as diverse as Spanish, Yoruba, and Urdu, and to explore other parts of the world.

The truth is, traveling the world doesn’t only allow us to see breathtaking sights or to exercise our fluency in foreign languages. More broadly, travel allows us to put our education in context. It demonstrates that we’re capable of having impact, but only if we enter the field and share what we’ve learned with others.

Most importantly, it unwraps the carefully packaged concept that we often develop of different cultures. Being shoved aside on an escalator in London, navigating cultural subtleties in Saudi Arabia, being interrogated while passing through the mountains in Nicaragua, constantly facing challenges to service provision in the slums of central Ghana — it’s these jarring experiences that have coupled my adventurous spirit with a grounding sense of humility, greeted me with the magnitude of my own ignorance, and left me starving for deeper engagements with other cultures.

Harvard’s undergraduate population comprises hundreds of driven students who will someday have global impact. But solving the world’s major issues requires a sense of understanding that comes only with seeking and listening to other perspectives. I’m grateful for these opportunities to complement the personality that has allowed me to thrive at Harvard with a more observant and introspective perspective.

As I returned to Boston for my senior year, it occurred to me that the gates of Harvard Yard and the comforting outline of the Charles River were never meant to be boundaries enclosing my Harvard experience. That brief moment of confusion on a London escalator, and the small reality checks I’ve been giving myself ever since, keep me aware that there’s a big world outside of the infamous Harvard “bubble” that is waiting to be noticed and engaged.

Looking out the window of my United Airlines flight, I felt as though I was simply taking a trip from one corner of my new, more expansive “home” to another. A small smile crept to the corners of my mouth — I knew I’d be back for more.