To honor the living and the dead 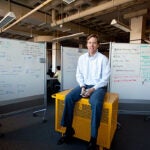 Veterans Day this year comes on the numerically memorable 11/11/11.

The holiday is especially significant for Harvard, since it’s the first Veterans Day in 40 years when there has been a Reserve Officers’ Training Corps (ROTC) office on campus.

“That means an awful lot to a lot of us,” said Thomas Reardon ’68, who was an Army infantry officer in Vietnam. He praised President Drew Faust for her “great, bold, decisive moves” in bringing ROTC back.

Reardon is president of the Harvard Veterans Alumni Organization, a nonprofit that is sponsoring an 11 a.m. Veterans Day ceremony at the Memorial Church and a luncheon afterward. The event will celebrate the return of ROTC, he said, and commemorate the more than 1,250 Harvard affiliates who lost their lives in America’s wars.

A new plaque will be unveiled at the Memorial Church, honoring the Harvard men who received the Congressional Medal of Honor, the highest U.S. military decoration for bravery. Harvard claims 17 recipients of the medal, more than any university other than the service academies.

The Nov. 11 ceremony will bring attention to “the long Crimson line of service of Harvard alumni,” said retired Navy Capt. Paul E. Mawn ’63, a onetime ROTC midshipman. “These are people who should not be forgotten. Some gave all, and all gave some.”

Mawn is chairman of Advocates for Harvard ROTC, an organization with 2,600 members, three-quarters of them graduates of the College. The group’s website includes thumbnail sketches of Harvard’s Medal of Honor recipients.

The first was U.S. Army Maj. Richard J. Curran, M.D. 1859, one of seven graduates awarded the honor during the Civil War. He was commended for his bravery as a field surgeon at the Battle of Antietam in 1862. The last recipient was Army Staff Sgt. Robert C. Murray, who was killed in Vietnam in 1970. He dove on a grenade to save the lives of those around him. Murray, 23, was in the M.B.A. Class of 1970 at Harvard Business School, but joined the service before finishing his degree.

The Medal of Honor tablet is hand-engraved from a slab of Vermont slate and will replace a 10-name tablet installed in the church in 2009. Both were paid for by donations to the Harvard veterans group. The guest speaker will be U.S. Air Force Maj. Gen. John E. Hyten ’81, an ROTC graduate. He is director of space programs acquisitions for the Air Force.

During the 2009 plaque ceremony, Faust said that Harvard’s Medal of Honor recipients “remind us of the meaning of character.”

A buffet luncheon will follow at the Queen’s Head Pub. Among those invited are the 150 veterans and active military members currently studying at Harvard.

“Crimson Valor,” a new book on Harvard’s Medal of Honor winners, is available at Amazon.com. Its author is Philip A. Keith ’68, a Vietnam veteran.