The return of ROTC 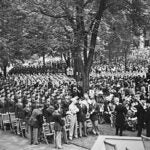 Among the top Harvard stories of 2011 was the return of the Reserve Officers’ Training Corps (ROTC) to campus after an absence of 40 years. In March, the University signed an agreement with the Navy. By September, offices had opened in Hilles Hall for the Naval ROTC’s Old Ironsides Battalion.

ROTC was banned from campus in 1971 during the Vietnam War protest — though starting in 1976 Harvard ROTC students could train at the Massachusetts Institute of Technology. By the mid-1980s, antiwar fervor at Harvard had been replaced by disappointment that gays and lesbians could not openly join the Armed Forces, a circumstance that kept ROTC from campus for decades more. That changed on Sept. 20. When the U.S. policy known as “Don’t Ask, Don’t Tell” expired, the doors of the military were opened to sexual diversity. Harvard captured the moment, thanks to initiatives begun years before by President Drew Faust, a Civil War historian and the daughter of a World War II veteran.

ROTC students at Harvard, present and past, are grateful that the military is back. “Every one at Harvard is serving their country in some way,” said Catherine Philbin ’14, midshipman third class with the Naval ROTC. “This is just the way we’re serving.”

Harvard’s “long crimson line” of military service stretches back to the 17th century, and includes 17 recipients of the Congressional Medal of Honor, the most of any university outside the service academies. Harvard’s relationship with ROTC dates to 1916, the year Army ROTC was established. The University’s “Harvard Regiment,” mobilized that year with 1,000 students, was among the first ROTC units in the country.