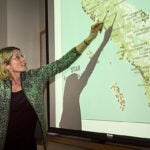 Legacy of an Indonesian tsunami

Fed-up voters may warm to a third party, experts say

Americans suffering through a fourth year of economic hardship and worried about the future are closer than ever to casting aside both major political parties in favor of a postpartisan ticket in the 2012 presidential race, a panel of political experts told an audience at Harvard Kennedy School (HKS).

McKinnon spoke Monday at “Campaign 2012: How Americans Will Select Their Next President,” a forum moderated by Trey Grayson, director of the Institute of Politics. Grayson launched the panel by asking Washington Post national political reporter Karen Tumulty what she’s seen out on the campaign trail.

Tumulty, M.B.A. ’81, a veteran observer of presidential politics, said voters are angry and scared. Only in the election years of 1980 and 1992 has a president’s approval rating been as low as President Obama’s, according to Tumulty, and each time the incumbent lost.

“People have lost confidence in the future and in their lives,” Tumulty said. “If I were the Obama White House, those numbers would worry me like no other.”

There’s an opening for a postpartisan insurgency, Tumulty said.

“Voters are upset with Washington, and they’re not very patient,” Tumulty said. “It feels as if the center of gravity is moving away from political parties.”

Kahlil Byrd, MPA ’03, is CEO of Americans Elect, a group proposing to create a nonpartisan presidential ticket that puts “people over party.”

People will vote for candidates via Internet and choose a nominee at a convention. The candidate will then select a running mate from the opposite party, according to the group’s website. The group is gathering signatures so the ticket will appear on a 50-state ballot for president in 2012.

“[It’s] their choice, a person on a nonpartisan ticket focused on their issues, who will actually be on the ballot in 2012,” said Byrd, whose Bay State bipartisan bona fides include working on Democratic Gov. Deval Patrick’s first campaign and Republican Jeff Beatty’s 2008 Senate bid.

Can a third-party candidate make it in a country that has never been able to count past two parties? McKinnon believes so.

“We are truly in uncharted waters,” said McKinnon, a Republican strategist, columnist for The Daily Beast, and co-founder of the bipartisan group No Labels. He said this could be the year a group like Byrd’s breaks through.

“The conditions have never been more fertile for something disruptive to happen,” McKinnon said.

“I’ve never seen an electorate with more anger, more anxiety,” said Devine, a senior strategist to Al Gore and Sen. John Kerry’s presidential campaigns. “To see the mood [here] like it is in a Third World country is really something.”

Devine added: “There’s a crowd ready to come in and it’s looking for an alternative. If an alternative is provided, it can be part of the equation.”