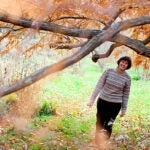 Actually, the star’s a turkey

Treatment with dexpramipexole — a novel drug believed to prevent dysfunction of mitochondria, the subcellular structures that provide most of a cell’s energy — appears to slow symptom progression in the neurodegenerative disease amyotrophic lateral sclerosis (ALS).  Promising results of a phase 2 trial of dexpramipexole are receiving advance online publication in Nature Medicine.  Some preliminary results of the study were presented at the 2009 International Symposium on ALS/MND (motor neuron disease) and the 2010 American Academy of Neurology annual meeting.

“Today there are only two FDA-approved drugs used to treat ALS — riluzole, which extends life about 10 percent, and Nuedexta, which treats the emotional instability that characterizes ALS and other neurological disorders,” said Merit Cudkowicz, director of the Harvard-affiliated Massachusetts General Hospital (MGH) Neurology Clinical Trials Unit and ALS Center, lead author of the study. “We need more therapies to slow, halt, and ultimately reverse the course of disease and also therapies to treat the symptoms.”

Several investigators from Knopp, which sponsored the study reported in the current article, collaborated with Cudkowicz and the Northeast ALS Consortium on the trial. Co-founded and co-directed by Cudkowicz, the Northeast ALS Consortium includes more than 100 clinical sites throughout North America that work collaboratively on clinical trials and has established the infrastructure necessarily to quickly and efficiently bring forward new treatments for people with the disorder.

The progression of ALS can vary widely, with some patients surviving decades after diagnosis and others dying within a year.  Therefore it can be quite challenging to develop phase 2 trials, which need both to test dosage levels and to determine potential effectiveness in small groups of participants over brief periods of time. To meet this challenge, the research team devised a two-stage study. In the first, 102 patients who had recently been diagnosed with ALS were randomized into four groups, receiving oral tablets of either a placebo or dexpramipexole at total daily dosages of either 50, 150, or 300 mg for 12 weeks. When that stage was completed, participants continuing in the trial received placebo only for four weeks and then were re-randomized into two different groups, receiving daily dosages of either 50 or 300 mg of the study drug for 24 weeks.

Results of the first stage showed that receiving dexpramipexole appeared to slow the progression of symptoms measured both by the ALS Functional Rating Scale and by pulmonary capacity. The protective effect was greatest in the 300 mg group — in whom symptom progression was approximately 30 percent slower than in the placebo group — and little effect was seen in those receiving 50 mg. The second stage had similar results, with slower disease progression and a reduced risk of death in participants receiving the higher dosage.  While results were not generally statistically significant, due to the small size and short duration of the study, all data trends were dose responsive.

“Since individual participants could have been in different treatment groups in the first and second stages of the study, seeing the same dose-dependent differences at both stages gives us confidence in the data. In a way, this was two supportive studies in one trial design,” said Cudkowicz, the Julieanne Dorn Professor of Neurology at Harvard Medical School. “Confirmation of these findings in the phase 3 clinical trial, which is currently ongoing, would give us even more confidence in this study design for phase 2 testing in ALS.  We hope that adding this drug to the approved treatments for ALS would give patients a chance to stay healthier longer, with slower decline of function and increased survival.”

The phase 3 clinical trial — sponsored by Biogen Idec, which has licensed development and commercialization of dexpramipexole from Knopp — began earlier this year and has completed enrollment at locations around the world.  Valentin Gribkoff, an adviser to Knopp Biosciences, is corresponding author of the Nature Medicine article.