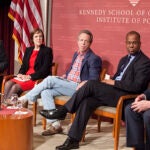 Amid fears that the European debt crisis is spreading from Greece to Italy, and with the United States amid its own economic woes, Hong Kong’s chief executive touts onetime Chinese leader Deng Xiaoping’s “one country, two systems” philosophy for his region’s economic fortitude.

“In some ways Hong Kong has had an easier time over the past decade than many other economies,” said Donald Tsang, M.P.A. ’82. “Our freedom from public debt, our position beside China’s growing economy, our prudent banking supervision — these have all helped to cushion us from some of the shocks that have come our way.”

Tsang spoke Tuesday night at the John F. Kennedy Jr. Forum at Harvard Kennedy School. The chief executive, whose term is ending in June, focused his talk on the relationship between Hong Kong and China, and how it has worked in recent history. Once a British colony, Hong Kong now is a special administrative region of China.

“Standing counterpoint to the story of economic uncertainty over the past 14 years is the story of the continued growth of Hong Kong as a unique, remarkable society,” said Tsang. “National pride and unity demanded a resumption of sovereignty; magnanimity allowed the different way of life in Hong Kong to be taken as something of value to be preserved and allowed to flourish.”

Tsang also spoke about how Hong Kong is not impervious to financial crisis. “Our city is open to the rise and fall of financial markets and swirling changes of the global economy,” he said.

Many of the Chinese and Hong Kong native students in attendance were more interested in hearing about what the local government was planning to do about its current problems. During the question-and-answer session, students repeatedly asked about the housing market — stressing how there just aren’t any apartments available there that they can afford. Overcrowded hospitals and universities also seemed a sensitive subject.

While Tsang offered no details, he said, “I agree with you. There are a lot of things left to do,” and he encouraged the students to become part of the solution. “Perhaps some of you may even venture to Hong Kong to become part of our narrative. History has not ended.”