Legacy of an Indonesian tsunami 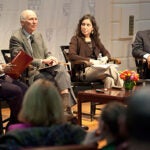 A matter of principals

The devastating Indian Ocean tsunami of 2004 created hundreds of orphans in one hard-hit region of Indonesia, forcing many teens to grow up quickly and leave school for work or marriage and many younger girls to forgo school to take up roles around the home.

The findings stemmed from five annual follow-up surveys of tsunami survivors by a team led by Elizabeth Frankenberg, a professor of public policy and sociology at Duke University. Frankenberg presented the surveys’ results Monday at the Harvard Center for Population and Development Studies. Frankenberg was introduced by center Director Lisa Berkman, the Thomas Cabot Professor of Public Policy and of Epidemiology at the Harvard School of Public Health, who called Frankenberg’s work groundbreaking.

The tsunami was nearly 100 feet high in some areas, scouring the coastline and depositing enormous mounds of debris miles inland. The tsunami was spawned by the 9.3 magnitude Sumatra-Andaman earthquake, one of the largest known, which pushed the sea floor upward 30 to 50 feet along a 1,200-mile fault. The enormous waves hit Indonesia’s coast within 15 minutes, but also spread across the Indian Ocean basin, affecting 26 countries.

The tsunami killed 160,000 people in the study area alone, displaced 700,000, and caused an estimated $4.5 billion in property damage, Frankenberg said. Before the disaster, Frankenberg and colleagues had conducted a household survey of 39,000 people in 525 communities in the coastal Aceh and North Sumatra regions.

Researchers conducted the first post-tsunami survey between five and 17 months afterward and repeated the process annually four times to track the disaster’s impact on orphaned children.

Mortality was high, averaging 27 percent in hard-hit coastal regions. Mortality was highest for the young and the old. Adult men survived more often than adult women, likely because women in the traditional Muslim society were discouraged from learning to swim and were burdened by restrictive clothing, Frankenberg said. Though researchers thought they might find that there were significant deaths from disease and other causes in displaced-persons camps, they found instead that the vast majority of deaths came during the tsunami itself, mainly from drowning.

Researchers found that about 30 percent of 1,173 children between ages of 9 and 17 from the pre-tsunami survey had died. Of the survivors, researchers located and interviewed 86 percent and found that 17 percent of them had lost one or both parents.

It was striking how quickly after the tsunami most children returned to school, Frankenberg said, possibly because of the structure and stability offered by school in otherwise disrupted lives. Schools reopened within six to eight weeks and by a year after the disaster 83 percent of orphaned children were attending.

In examining results over five years, researchers broke their results down to older children 15 to 17 and those 9 to 14. Among the older group, Frankenberg said the teens appeared to fill the roles of missing parents, with boys dropping out of school to work, and girls less likely to be at school or work, but taking on more household chores and more likely to be married.

The girls were more likely to marry older men, as men who lost wives in the disaster quickly remarried. The result was that the average age gap between men and their wives in the area rose from about 6 years to 13 years.

“My interpretation [of the data] is that they basically got married and did housework,” Frankenberg said.

Overall, Frankenberg said, the traditional Muslim society in the region absorbed orphans into surviving households. Children lived with relatives, with a surviving parent who remarried, or even in households formed by older orphans. Only six orphans were found in institutions, she said.

Frankenberg said the survey results conflict with similar studies in Africa of children who lose one parent to AIDS. Those studies showed that children have worse outcomes if they lose their mother, while the post-tsunami surveys show that children fared worse if their father was killed.

Another lesson is that recovery from such a catastrophe takes years, not months. Criticism about how slow recovery is moving even a year after such an event is misplaced, she said. Recovery does occur, but slowly.

“You can’t look at a disaster and think of recovery in months,” Frankenberg said.

One area of success in Indonesia has involved housing, Frankenberg said. Before the tsunami, 79 percent of those surveyed lived in homes owned by a family member. In 2005-06, that had fallen to 47 percent as people lived in camps and struggled to rebuild destroyed homes. By 2009-10, however, that number was back up to 77 percent.

Still, Frankenberg said, some effects will be long lasting. Mental health status is poorly studied, and resources are hard to come by. Surveys after the tsunami showed high levels of post-traumatic shock among adults, but also showed the number of those affected falling over the intervening years. Despite that broader recovery, it’s likely that some people will continue to suffer, she said.