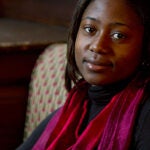 Travel as its own education

Entrepreneurs often put in long hours, and Gordon Jones, director of the new Harvard Innovation Lab, is no exception. But unlike the Mark Zuckerbergs of the world, Jones won’t be up late hunched over a laptop, perfecting code.

Instead, on a recent Monday afternoon, Jones was preparing to host 200 Harvard undergraduates for an evening session of CS 50, the enormously popular computer science course, at the i-lab.

“I’ll be here until midnight,” he said.

The i-lab, the University’s new initiative to foster team-based and entrepreneurial activity across campus and with Greater Boston’s business community, is a startup itself. No one understands that better than Jones, who took the job in May.

“It’s an experiment in ‘one Harvard,’” he said. And just like anyone hoping to launch a new venture, Jones will need vision to succeed.

“We’re not a program on innovation,” Jones said. “We’re more about encouraging you to take advantage of the resources Harvard has, at whatever stage you’re at” in a company’s development.

Jones doesn’t necessarily look the part of a slick M.B.A. Clad in a short-sleeve shirt and jeans, and sporting boyish red hair, he blends in easily with the Harvard students and recent graduates who currently populate the i-lab’s workspaces, brainstorming their new ventures. He has their energy, too.

Jones recognizes his role as a busy mix of the high-stakes and the hands-on. He might start the day hosting the i-lab’s board — an intimidating lineup of seven Harvard deans, Provost Alan M. Garber, and Stem Cell Institute co-director Doug Melton — for a quarterly meeting and end it by making a snack run to restock the building’s fridge.

“It’s Diet Coke–fueled,” he said of his work at the i-lab, taking a gulp from his second can that hour. “I love this job. I get up every morning energized, and I go to bed exhausted — or at least very tired.”

Jones describes his background as “part entrepreneur, part intrapreneur, and part educator.” His career has given him both an “empathy for the entrepreneur” and a savvy for navigating large organizations, a prerequisite for his Harvard role.

The last credential is no afterthought. His first job was in education two decades ago. After graduating from Brown University in 1991, he moved to rural Arizona to teach math at a struggling school.

“It struck me as an opportunity to step into a leadership role without regard for my immediate qualifications,” he said. Like later forays into building products and companies, he said, “It was less about your pedigree and more about seeing what people can do.”

He then matriculated at Stanford Business School, earning his M.B.A. in 1996. From there he began a successful career in business, launching more than a dozen new products at several companies, from established giants to scrappy startups.

As senior vice president of marketing and sales for American Biophysics Corp., he helped take the company’s Mosquito Magnet trap to market; in 2003, the company was named the fastest-growing in America by Inc. Magazine.

Jones isn’t entirely new to Harvard. Since 2007, he has evaluated applicants for the Harvard Business School (HBS) admissions office. The following year, he began teaching marketing as an adjunct lecturer at Bentley University. Just as the “entrepreneurial bug” once bit him, the higher education bug soon took hold.

“That educator in me is starting to come forward,” said Jones, 42, who has settled into a home in Needham with his wife, a physical therapist, and their three boys, ages 5, 3, and 1. “This is a wonderful opportunity for a second career.

Universities are full of “people who are looking to solve the big problems,” Jones said, and “Harvard students have a passion for big issues.”

The i-lab is more than just an ambitious idea — it’s a place. And Jones’ job is to get people to come to the HBS campus and see what the new lab, housed in the former WGBH building at 125 Western Ave., is all about.

Rather than having grand light fixtures hanging from the ceiling, power strips dangle from pulleys, ready to be pulled down at a moment’s notice for a laptop. Several walls were in the process of being coated in whiteboard paint, “so you’re never far from what you need to get your ideas down,” Jones explained.

“We want to be consistent with what innovation looks like,” he said. “But it’s not just looking the part.”

That means reaching out to the people with ideas, from faculty to students to the entrepreneurial community at large.

“We want to be student-centered, faculty-enabled,” he said. “If we make the mistake of … leaving students out of that process, we run the risk of not having a strong partnership with students, who are really our focus.”

Like any startup, the i-lab carries a degree of risk. As Jones noted, in the real world, 80 to 85 percent of new consumer products fail. Not every venture that gets its start in the i-lab can be the next Facebook, he said. But that’s not the point.

Failure is “going to happen, and it’s going to happen a lot when you innovate. It’s something for student entrepreneurs to get comfortable with and learn from.”

The real measure of the i-lab’s success, he said, will be the amount of learning and community engagement it fosters. The building officially opens to the public on Nov. 18.

Already, five courses are being taught in the building, Jones said. The i-lab will shortly host Harvard Startup Weekend, an “unconference” for 100 would-be entrepreneurs from Harvard and Massachusetts Institute of Technology.

“It’s a full-on, pedal-to-the-floor, keep-building-the-car-while-it’s-moving approach,” he said. But as most entrepreneurs would attest, the journey can be just as rewarding as the destination.