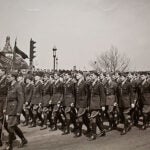 To honor the living and the dead

This year will mark the 70th anniversary of the Japanese attack on Pearl Harbor on Dec. 7, 1941, the “day of infamy” that drew the United States into World War II.

And tomorrow (Nov. 11) is Veterans Day, the first at Harvard since the University reinstated a campus office for the Reserve Officers’ Training Corps. So what better time to recount Harvard’s role in World War II: