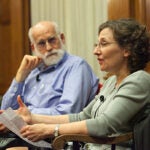 Student research project brings aspects of troubling past to light

Harvard College came of age in the 17th and 18th centuries, a period with values often very different from our own. Slavery — which was legal in Massachusetts until 1783 — is a case in point. Did this dark chapter of American history affect Harvard? Yes.

That entanglement is the point of “Harvard and Slavery: Seeking a Forgotten History,” a booklet launched on Wednesday by the Harvard and Slavery Research Project. Involved were 32 students, one faculty historian, and a graduate student. “The history of slavery,” write authors Sven Beckert and Katherine Stevens, “is also local history.”

The 34-page study packs into its economical format details of what will be historical surprises to most readers. It reports that three Harvard presidents owned slaves; that slaves worked on campus as early as 1639; that among the first residents of Wadsworth House (built in 1726) were two slaves, Titus and Venus; that slave labor often underwrote the success of Harvard’s early private benefactors; and that the connection between College donations and slave-related industries persisted until the Civil War.

Beckert, who has taught a seminar on Harvard and slavery, is the Laird Bell Professor of History. Stevens is a graduate student in the History of American Civilization program.

In an email, Beckert said his students — from both Harvard College and the Harvard Extension School — “have spent many hours working in Harvard’s archives to untangle the historical relations between Harvard University and the institution of slavery.” The results include the booklet, funded by the Office of the President; a website; a series of student videos; a video-assisted walking tour; links to parallel projects at Brown University, the College of William and Mary, and other schools; and citations for 25 student papers.

“One thing that struck me is the persistent selectivity of historical narrative,” said A.L.M. candidate Robert G. Mann, who this year is a special student at the Graduate School of Arts and Sciences. History often ignores issues that societies themselves ignored in their own times.

Mann’s paper and video concern James Perkins, a generous donor to Harvard in the 19th century, whose businesses included slave trading. In his history of Harvard, Josiah Quincy III, who was president of Harvard from 1829 to 1845, wrote that Perkins “was formed on the noblest and purest model of professional uprightness; without guile and without reproach.” Said Mann in an email, “Standards change, and the slave trade was once considered a legitimate form of commerce.”

Brandi Waters, an A.L.M. candidate in history, wrote a paper and starred in a video about the role of Harvard’s Warren House in the Underground Railroad that transported and hid escaped slaves. (A trapdoor led to a tiny, hidden basement bedroom.) “The most surprising elements of this history are in the details,” she said.

But being part of this research project also inspired Waters as an African-American student. “Having empirical evidence that my ancestors’ unfree efforts were foundational to the creation of Harvard’s dominance, that it wasn’t possible without them,” she wrote in an email, “helps me find my place in what’s typically known as a history of great men.”

One of those men was the subject of a paper by Jennifer Dowdell, an A.L.B. candidate. It focused on Peter Chardon Brooks, a major donor to Harvard just before the Civil War. She said he retired at 36 on profits from commodities linked to slave labor in the West Indies, including tobacco, sugar, molasses, and cotton. “As we celebrate the 375th anniversary,” wrote Dowdell in an email, “let’s not forget the importance of recognizing our history at this prestigious University and acknowledging that a portion of that privilege came from the work and lives of slaves.”

Slaves died tragically nearby too. Harvard Extension School student Jim Henle wrote about the execution of slaves “Mark and Phillis” in 1755. He was hanged, and she was burned at the stake — so close to the College that smoke from the fire drifted over Harvard Yard. Henle’s video at the site of the former “gallows lot” in North Cambridge is an example of the largely forgotten local spaces involving slavery.

Alexa Rahman ’12, a history concentrator with a secondary in economics, wrote a paper and did a video on Edwin Farnsworth Atkins. Atkins’ onetime slave plantation in Cuba, called Soledad, was donated to Harvard as a botanical research station. It’s “now a popular tourist site,” she wrote in an email. But it was also the locus of an early, uneasy rumination on slave-trade legacies. Harvard botanist Oakes Ames (1874-1950) visited the site of the Harvard Experiment Station in 1903. He was inspired by the tolling of a plantation bell to muse on the “awful reality” of the slavery that had ceased there just 15 years before.

“This essay has been an effort to hold Harvard, and all of us who enjoy its unparalleled intellectual resources, in the uneasy moment of the bell,” the booklet says, “and not slip too quickly into the calming righteousness of moral hindsight.”