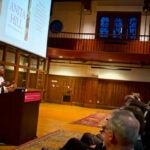 Anita Hill looks back, and ahead

Believes donors should be able to contribute what they wish

“I think we are 100 percent. I think we are all Americans,” Gingrich said as officials directed security guards to eject the protesters, who sarcastically thanked the former House speaker for “standing up for corporations.”

Later, Gingrich distanced himself from the nearly $2 million in payments his consulting firm collected from mortgage giant Freddie Mac, which he has blamed for playing a major role in the national housing crisis.

“I didn’t take it,” Gingrich told reporters after the forum, saying the fees went to the Gingrich Group. “Freddie Mac paid Gingrich Group — which has a number of employees and a number of offices — a consulting fee just like you would pay any other consulting firm.” Gingrich said he is no longer affiliated with the company bearing his name and said he hopes the organization will release its earning numbers from Freddie Mac to the public. Gingrich has called on President Barack Obama to return campaign contributions received from Freddie Mac.

When fielding questions from the student audience earlier, Gingrich seemed to have conflicting feelings about the political consulting industry when a student asked how much time elected officials spend raising money for their next campaigns.

“Post-Watergate micro-democratization of financing is a spectacular disaster,” said Gingrich. “We’d be vastly better off if anyone could give as much as you want, and it would be reported every night on the Internet,” he said. “What’s happened is we’ve grown a consulting industry, so that instead of having the old-time, big-city machine bosses, we now have these consultants,” said Gingrich.

Gingrich’s appearance was booked months ago, and required him to slip away from campaigning in New Hampshire, which holds the nation’s first presidential primary, to address a student audience less likely to include supportive voters. The Georgia Republican, who served as House speaker from 1995 to 1999, accepted an invitation from Institute of Politics Director Trey Grayson to present a public policy film on American exceptionalism, “A City Upon a Hill,” which he narrates with his wife Callista, its co-host and executive producer.

The film is produced by Gingrich Productions and Citizens United, the Republican advocacy group that prevailed in a Supreme Court case recognizing the free-speech rights of corporations. Presidential candidate Michelle Bachmann and former candidate Donald Trump appear in the film to suggest the special supremacy of the United States and its citizens.

The film stresses the accessibility of economic success to all Americans, in contrast to European nations with historically rigid class systems and some monarchies. An HKS student took issue with Gingrich’s claim that former California governor Arnold Schwarzenegger never could have been elected in his native Austria and asked Gingrich, “Do you think Europe is still a dictatorship?”

Gingrich said he didn’t see significant change in Europe, where, he said, “the political systems are dramatically more closed than here. “Of the United States, he said, “This is the most open-to-talent system on the planet.”

During the student question-and-answer session, Christopher Lloyd, an M.B.A. student at Harvard Business School, asked, “Given some of your public ethical lapses, how can we be sure you’ll be an ethical president?” In 1997, Gingrich became the first House speaker sanctioned for ethics violations when he was ordered to pay $300,000 for tax improprieties concerning the use of a tax-exempt college course for political purposes.

Gingrich brushed the question aside, instead embracing his longevity in Washington.