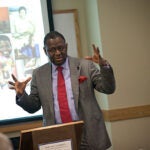 For the past few years, Harvard’s Edmond J. Safra Center for Ethics has been wrestling with the knotty problem of institutional corruption, the diversion of an institution’s mission in response to legal but undue influences from outside, which often results in a loss of trust among the institution’s constituency.

Now the center is seeking a practical way of monitoring institutional corruption, generating ideas from the Harvard community and the public through a contest launched this week with $8,000 in prize money.

The Systems to Monitor Institutional Corruption challenge, being conducted with InnoCentive, a company that specializes in arranging such contests, seeks new ideas on how to use the abundant data available from the Internet, government records, watchdog groups, and other sources to highlight and discourage such corruption.

Center Director Lawrence Lessig said the contest idea is something of an experiment, and he wasn’t sure what would result from it.

“Optimistically, we’ll get fresh thinking on ways to look at the wrong kinds of influence,” Lessig said. “It’s an experiment; we’ll see what we get.”

Authorities have fought illegal corruption — such as might result when contractors pay public officials to hire them for government construction projects — for decades, but institutional corruption is tougher to battle, Lessig said. That’s because the practices that enable it are generally legal and within societal norms. Examples include the influence of lobbyists and major campaign donors on elected officials, of pharmaceutical companies on physicians’ prescription practices, and of funding sources on academic researchers.

Though campaign donations are legal, for instance, U.S. representatives whose campaign managers insist that they spend time on the phone with wealthy potential donors typically don’t give the same attention to less-wealthy constituents, Lessig said. In addition, when politicians are forced to spend between 30 and 70 percent of their time raising money, that’s less time they can spend attending hearings, drafting legislation, and meeting with constituents.

Though many critics agree that the problem needs to be addressed, Lessig said it’s so ingrained in the system that there is a lot of skepticism about whether it can be changed. Still, he said, a nation that tackled Nazism, racism, and sexism in the last century should be able to tackle this one. In fact, he said, with regard to Congress, a single systemwide change — instituting public campaign financing — would go a long way toward eliminating it.

“A version of public funding would take care of the problem almost overnight,” Lessig said.

Center Research Director Neeru Paharia said that while institutional corruption is as old as institutions themselves, the information age provides an opportunity to address the concerns through access to enormous amounts of electronic data.

“What is different now is we do have technology, the Internet, and people who can collect data,” said Paharia.

Successful contest entrants will offer ways to highlight meaningful data that goes to the heart of a problem. For example, she said, providing raw numbers on how much money doctors get from pharmaceutical companies may be helpful, but putting those numbers together with physician-prescribing practices would make that data much more meaningful.

Contest entries are due by Nov. 8, Paharia said. The prize money will be divided among a few winners, most likely with one top winner and one or two others. What happens next is also open-ended. The lead idea could be fleshed out by Center researchers, or the winner could be engaged to develop it more fully.