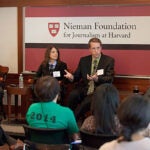 Several students at the Harvard Graduate School of Design (GSD) spent two months in northeastern Japan over the summer, bringing their expertise to bear on a region still reeling from an earthquake and tsunami earlier this year. Before heading overseas, they researched participatory design and other concepts.

On arrival, they encountered the sights and smells you can’t get out of books. “We were faced with the reality of the situation,” said GSD student Yuhka Miura.

In a Sept. 30 lecture, she and her two traveling companions showed slides of a downtown landscape swept nearly bare by the penetrating sea. It was Minamisanriku in Miyagi Prefecture, where nearly 1,000 people were reported dead or missing. The seaside town is part of Japan’s remote Tohoku region, where three of six prefectures took the brunt of the destruction.

Matching research and reality is the idea behind the GSD’s Community Service Fellows program, endowed since the 1970s to support student projects. Some fellows take 10-week paid internships in domestic settings — at the New York Botanical Garden, for instance. Others travel for research and public service overseas, including this year to Japan, India, Singapore, and Vietnam.

Program administrator Meryl Golden, director of career services at GSD, said fellowship travel abroad is often to the Third World. This summer one student investigated micro-home technology in New Delhi; another looked into a livable-cities program in Hanoi.

In recent years, the fellows’ experiences have not ended up as part of shelved reports or in private academic exercises. Instead, they have been grist for the GSD’s fall Student Lecture Series.

Joining Miura for the lunchtime Gund Hall talk were Sky Milner and Stephen Fan. While in Minamisanriku they were accompanied by Miho Mazereeuw, a GSD lecturer in landscape architecture and an authority on the confluence of design and disaster prevention. (Her forthcoming book, featuring case studies from earthquake-prone areas, is titled “Preemptive Design: Disaster and Urban Development along the Pacific Ring of Fire.”)

The GSD group worked with urban design experts from the Massachusetts Institute of Technology and nearby Miyagi University. When they arrived, temporary housing camps were just opening on untouched high ground, the site of a middle school. Each family of four was allocated about 260 square feet. Narrow alleyways made privacy limited, and a sense of community was fragile.

During their stay, the Harvard students helped to design and build a small community center, starting with outreach meetings to gather ideas. At the first meeting, they offered tea under the shade of a simple awning. In the end, the center was built from 2,500 blocks sawn from local scrap wood. The framing went up in about three days, said Milner, and local carpenters helped finish it.

In late July, the group also presented posters of deeply researched ideas for community revitalization, including relocation options. But one question hovered over them, said Milner: What is the role of design in disaster relief? “That was the ongoing challenge,” he said.

Then there is the issue shared by anyone working for the public good in brief intervals overseas: As outsiders, how do you establish trust? Part of the issue is finding out who to talk to — how to find a community leader in a place where community has been shattered. “That was the scramble from the beginning,” said Milner.

The constraints of time were undeniable too. All three students were disappointed at having to leave after just a summer, since Minamisanriku and the Tohoku region face a reconstruction challenge of at least two to five years. But Fan was hopeful that students, even two months at a time, can make a difference. He said, “This is always seen as the start of a much larger commitment.”

The GSD Student Lectures, packed into an hour, can offer wild swings in locale. Next up on Sept. 30 was Gavin Kroeber, whose degree concentration — new to GSD — is in art, design, and the public domain. He spent the summer at the Queens Museum of Art in Corona, Queens, New York.

Corona is a diverse and dense part of Queens, where nearly 170 languages are spoken and 46 percent of the population is foreign-born. The museum, a remnant from the 1939 World’s Fair, is full of “charming oddities,” said Kroeber, including its curving, riverlike gallery corridors and its vast scale model of New York.

He called his sojourn in Queens a tale of Roosevelt Avenue, the vibrant promenade whose energy is hidden from riders clicking past in subway cars. It was also a tale of three related places, he said: the museum; a yellow-brick activism storefront at 111th Street; and Corona Park at 103rd, where the neighborhood’s immigration concerns are plain. Box-truck moving vans crowd the adjacent streets, engines idling, said Kroeber. Business is good because evictions are common.

During his summer as a Community Service Fellow, Kroeber immersed himself in a world where art and activism merge — in ways that sometimes blur the lines between both. For one, he studied the ways that art museums are becoming a “de facto development force.”

One example is at the storefront at 111th Street and Roosevelt, the headquarters of Immigrant Movement International, a five-year project by artist Tania Bruguera. Her mission is to promote and organize “useful art,” in which artists give explicit voice to urgent issues. This can sometimes become “behavior art,” said Kroeber, who showed a slide of two men on horseback on a city street, and another of a woman at a podium with a dove on one shoulder.

Bruguera aims to re-imagine immigrants of the world as “an international culture class,” Kroeber said, “parallel to the proletariat of an earlier time.”

Urban fairs are part of this artist-as-organizer movement, he added, as are instances of guerrilla art on city streets. He showed a slide of a faux street sign that read “Legal Waiting Area,” a reference to how gatherings of immigrants often face the threat of being rousted.

He said “cultural products” are often about “community action.”

His exposure to activist art, said Kroeber, “let me get behind the scenes and see how it works.”