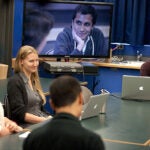 Two Harvard events this week pondered the ideas and the realities behind Occupy Wall Street, a monthlong economic protest in New York City that has spawned hundreds of similar actions across the globe, including in Boston.

A Harvard professor of design used a lunchtime lecture on Oct. 12 to explain the legalities of privately owned public spaces like Zuccotti Park in Manhattan, ground zero for Occupy Wall Street.

And a panel discussion at the Harvard Kennedy School’s (HKS) John F. Kennedy Jr. Forum last night attempted to parse the meaning of the protest, whose chief metaphor is “99 percent,” meaning the vast majority of Americans who have failed to gain economic ground while Wall Street profits have grown.

The panel, sponsored by the Institute of Politics (IOP), didn’t answer a pivotal question about Occupy Wall Street, raised right away by moderator Marshall Ganz ’64: “Is it a moment,” he wondered, “or a movement?” (Ganz, a senior lecturer in public policy at HKS, is a veteran of social protest going back to the early 1960s.)

But the intensity of the hour-long event — including raucous statements and chanting from the audience — seemed to suggest that unfolding events represented a movement in the making.

“What took so long” to prompt something like Occupy Wall Street, asked panelist Todd Gitlin ’63, “given the degree of hurt there is?”

If Barack Obama had not been elected president, he suggested, “this would have happened two years ago.”

Gitlin, a professor of sociology and journalism at Columbia University, called the movement “an angry work in progress.” Like Ganz, he has activist chops that go way back. In 1963-1964, Gitlin, who was a mathematics concentrator at Harvard, was president of Students for a Democratic Society, just as Vietnam War protests were heating up.

Occupy Wall Street might be a movement, but it is no Tea Party, said Vanessa Williamson, a third-year Ph.D. student in government and social policy at HKS. (She spent the last two years doing field interviews for an upcoming book she co-authored on the Tea Party.) For one thing, the Tea Party is not upset at Wall Street, she said. For another, its short-term goal is to prevent change, not create it.

Occupy Wall Street’s message of economic disparity “needed to be said,” said IOP visiting fellow Edward Rendell, the former Democratic governor of Pennsylvania (2003-11). “The trend lines are abysmal. Something has to change.”

The average U.S. personal income has fallen in the past 10 years, he said, the first such slump in American history.

But movements succeed only when they appeal to the average person, said Rendell. Occupy Wall Street can only do so if it stays peaceful, he said, and if its discontent is channeled into the political process. “We overthrow our government at the ballot box,” said Rendell, who suggested that it’s time to do some overthrowing, including a constitutional amendment to reverse the unrestricted flow of money from interest groups. “If there’s ever been a reason to register and vote, this is it.”

But the trend lines at the ballot box are as bad as the ones involving the economy, said Rendell. He cited recent elections in Philadelphia, where he was once mayor, in which only half of the eligible adults voted.

Things were different in 2008, said Gitlin. The Obama campaign then energized voters under 30, in numbers that for once exceeded those of voters over 65. “It had a utopian edge,” he said of the desire for change that Obama represented. But the trend collapsed two years later, when a Republican surge dominated the 2010 elections.

Consider what the American political scene might be like by January 2013, said Rendell: a Republican House, Senate, and perhaps White House. That would mean a free ride for some core conservative ideas, he continued, including “vote suppression” through identity requirements.

Only Obama stands in the way of that, said Rendell, who drew the night’s biggest hoots and cheers with his description of the president as “the last guardian of the gates of hell.”

Williamson recently visited Manhattan’s Zuccotti Park, a place of admirable organization, she said, which even has its own newspaper, the Occupy Wall Street Journal.

Jerold S. Kayden also recently visited Zuccotti and came back with dozens of photos, which he said showed that sense of organization, cooperation, and democracy in action. (A lawyer and urban planner, he is the Frank Backus Williams Professor of Urban Planning and Design at the Harvard Graduate School of Design, and has a joint appointment at HKS.)

In his Wednesday lecture at Gund Hall, he described the de facto village that Occupy Wall Street has created in its 25,000 square feet of Manhattan, two blocks from the site of the 9/11 terror attacks. It has its own housing (a corner for tents and sleeping bags), library, entertainment venues, and outdoor barbershop.

Kayden, who wrote a key book on privately owned public spaces, acknowledged the Woodstock-like warmth of and sense of freedom in the little park, its orderliness, and the “seismic role it is playing” on the world’s stage. But as a lawyer, he said, Occupy Wall Street and its organizers are going to have to start sharing the space again, since it was meant for everyone. Kayden suggested that a corner of the park be set aside for the economic protest, a strategy that would restore “spatial pluralism.”

Occupy Wall Street is an “enormous success” as a protest, he said, but it also presents an opportunity for public debate on the nature of what the law defines as “privately owned public space.” Like Zuccotti Park, these are privately owned spaces that are open to the public in exchange for zoning concessions. (New York City has about 550 such spaces.)

In fact, spaces like Zuccotti Park are most the often accessible to the public, 24 hours a day by law. In contrast, city parks are closed at night, and any protest is allowed by permit only. This legally defined public space makes 24-hour protest possible, said Kayden, but over time brings up the issue of fairness.

As Occupy Wall Street spreads across the world, he said, it might be time for the space it occupies in Manhattan to shrink.