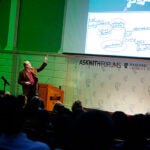 What makes a thinker

Can emotional media narratives about undocumented workers be tempered with data about the true economic impact of global immigration? Could scholars help journalists dispassionately analyze a red-hot political topic?

These questions were discussed — sometimes soberly, sometimes passionately — during a conference on “The Futures of Immigration: Scholars and Journalists in Dialogue” held Friday at the Walter Lippmann House, home to the Nieman Foundation for Journalism at Harvard. The afternoon conference brought together academics and working reporters to hash out immigration topics such as the law, economics, and the future impact of the new arrivals’ children on U.S. labor markets and culture.

Richard Hornik, moderator of a discussion on “Immigration in a Time of Economic Crisis,” repeatedly challenged his panel concerning how professors and other academics could work with journalists to present a fuller portrait of immigration issues.

But the former Time magazine editor and Harvard Business Review contributing editor may not have found the answers, despite the lively give-and-take about points that panelists acknowledged were often passed over in public debates.

For starters, Richard B. Freeman, the Herbert Ascherman Professor of Economics, noted that undocumented immigration to this country has diminished amid the recession.

“Those people come for jobs. And when there are no jobs — and the country certainly is not in a good situation with respect to jobs — we then see the immigrants stop coming,” he said. There’s also a decrease in those coming in with non-immigrant work visas. Still arriving are students in higher education, many of whom historically settle here, he said.

“If you don’t want [undocumented workers] in the country, you should be happy. But in fact you would be much happier if they were trying to get into the country because that means we have a good recovery,” Freeman said.

Undocumented workers do negatively affect the bottom 10 percent of the American labor pool, said Edward Schumacher-Matos, the ombudsman for National Public Radio and the former director of Migration and Integration Studies at Harvard School of Public Health. However, he noted, perhaps half of that 10 percent is made up of former immigrants. “So who’s being hit the most by undocumented workers? Previously undocumented workers,” he said.

The drastic decline of the housing market seems to have had a less dramatic impact on immigrant populations, said Gary Painter, the director of research at the Lusk Center for Real Estate at the University of Southern California. The gains in housing ownership made from 2006 to 2007 by the general population have been all but washed out, but ownership rates among Latino immigrants were not hit as hard, and this is particularly notable in smaller metro areas. Painter said this data should be viewed with caution, because it may reflect the increased economic status of immigrants the longer they are in this country.

Another fact discussed by the panel: Undocumented workers are helping to plug the Social Security shortfall. According to 2007 figures, unauthorized immigrants contributed 5 to 10 percent of the Social Security trust fund, Schumacher-Matos said. “We would already be having a solvency problem today with Social Security if it weren’t for that money. [Insolvency] is going to happen anyway. Will this save Social Security? No. Does it make a difference? Yes.”

Such information may not be getting sufficient attention, as economically troubled newspapers and other media outlets are cutting back on reporters and resources devoted to immigration issues. “Fewer stories are being told,” said panelist Cindy E. Rodriguez, a former Boston Globe reporter on immigration issues and a journalist-in-residence at Emerson College. Even more sadly, time-strapped journalists “don’t really cover the issues in depth.”

Conference organizer Marcelo Suarez-Orozco, professor of globalization and education at New York University, said the problem may be one of overreach. “We have a $14 trillion economy. The impact of immigration … is relatively moderate. Immigrants are not going to make the U.S. economy; they’re not going to break the U.S. economy,” he said.

Rodriguez countered that if undocumented workers went on strike, “You would have a hard time finding a place to eat. There would be no one cooking the meal, no one doing the dishes.”

But expand the definition of immigrants to “foreign-born people” who are now citizens, and the impact at Harvard would be drastic, Freeman said. “Imagine if all the immigrants went home from Harvard University. I would say 40 percent of the classes would have nobody teaching them,” he said. “I have a slide I used in science presentations: What would happen if foreign-born people left our labs? [It’s a] photo of an empty lab.”

However, Freeman said, “The bulk of the economic benefits of immigration go to immigrants. They may send money back to their villages and so on, but the gap between the pay in their home country and the pay in our country is massive.”

Schumacher-Matos underscored the point made by Suarez-Orozco, by observing that “in a macro sense, for the U.S. economy, the impact [of immigration] is about zero.”

He added that if worldwide immigration (which is restricted by virtually every country, as Freeman noted) were to be even slightly loosened, this would help the global economy. “Over time we would all become richer. The problem is, it’s over time,” Schumacher-Matos said. “The best way to raise global health and global wealth would follow … would, in fact, be a free flow of people.”

Audience member Abraham F. Lowenthal, professor of ethics, globalization, and development at the University of California, chided the panel for not focusing more on specifics of how academics can help the media grasp the complexities and nuances of issues. Lowenthal then described how he tries to educate reporters who call him but noted he has learned to include a “seven-second” sentence or sound bite. Predictably, someone in the audience shouted out, amid laughter, that Lowenthal had used up his seven seconds.

The session was sponsored by Immigration Studies at New York University and by the Tomás Rivera Policy Institute at the University of Southern California, with support from the Harvard Graduate School of Education, the David Rockefeller Center for Latin American Studies at Harvard, and the Nieman Foundation.