Lessons from a leader 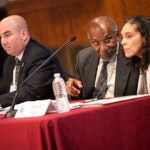 Faust outlines what aids success and muses on own role

Harvard President Drew Faust offered her perspective on effective leadership during an informal discussion with about 30 Harvard undergraduates on Friday at the Institute of Politics (IOP) at Harvard Kennedy School (HKS).

Addressing the IOP’s Women’s Initiative in Leadership program, Faust offered three principles of great leadership, using examples gleaned from her work as a historian. Connectedness, communication, and the ability to accept responsibility are all vital qualities for effective leaders, said Faust.

She said that Bill Clinton, with his powerful ability to connect with people, developed a following of supporters who felt truly engaged. Abraham Lincoln, an exceptional communicator, was a leader whose gift for language enabled him to connect people with “something bigger than themselves.”

The best leaders also can shoulder the greatest responsibility. They are willing to say, “I will own this, and I will give of myself for it.”

She illustrated her point with a telling anecdote. As the Allied forces prepared to invade Normandy in a monumental effort to break Adolf Hitler’s forces in France during World War II, Gen. Dwight D. Eisenhower, the Allies’ supreme commander, drafted two communiqués, “one to be used if he succeeded, the other to be used if he failed.”

He started the communiqué that would have been used for failure in the passive voice. But then he revised the document, inserting language that made it clear he took full blame.

“He essentially wrote the communiqué so that if D-Day failed he would be seen as responsible.”

The Women’s Initiative in Leadership program began during the tenure of present U.S. Sen. Jeanne Shaheen, who was IOP director from 2005 until 2007. Shaheen wanted the program to help undergraduate women augment their skills through workshops and discussions with women leaders. Students apply for the program at the beginning of each semester, and 25-30 undergraduates are selected. Weekly meetings take different forms, including skill sessions in areas such as negotiation and networking.

This year’s speakers have included Caroline Light, lecturer on studies of women, gender, and sexuality in Harvard’s Faculty of Arts and Sciences, HKS lecturer Juliette Kayyem, who was assistant secretary for intergovernmental affairs in the U.S. Department of Homeland Security, and Sarah Wald, chief of staff in the office of HKS Dean David Ellwood.

Organizers thought that hearing from “the premier leader at Harvard” would be an important opportunity, said senior Jyoti Jasrasaria, who serves as the group’s chairperson.

Faust also wanted to hear from the audience members. Her broad remarks about leadership “helped us all think about our own role as leaders as well as leadership more broadly, and was really important in fostering a really frank and open discussion. … I think she was a great facilitator … really asking students what they thought,” said Jasrasaria.

Faust also fielded questions. The students wanted to know how she copes with self-doubt, her thoughts on the current political climate, and her take on balancing a marriage with a career. They also wondered what she considers some of her biggest Harvard accomplishments.

In easing self-doubt, Faust urged the students to turn to trusted mentors, associates, and friends for advice, and to ask questions.

“I find that asking questions increases my sense of security … because I feel that I am taking an examined position, a position that is driven by strong analysis.”

As an example of her accomplishments as president, Faust said she was proud of updating the University’s governing structure — something that hadn’t changed since its formation in 1650 — by increasing its size, adding committees, and improving its capacity to govern effectively.

Student Amanda McGowan asked Faust to name her own most inspiring historical figure. The junior, a history concentrator, was thrilled when the answer matched the name of her own favorite leader, Abraham Lincoln.

“I am a longtime fan of President Faust,” said McGowan, “not only because she is an amazing leader on campus, but [she’s a historian] … so hearing that we both have an affinity for President Lincoln was really cool.”

For Faust, Lincoln’s use of language, his deft ability to make his enemies his friends, and his capacity to take advantage of critical opportunities rank him at the top.

Responding to a student worried about what lies ahead after graduation, Faust urged them all to “take a risk.” Instead of being weighed down by fear about next steps, she encouraged them to “see it as a time of experimentation, and opportunity.”